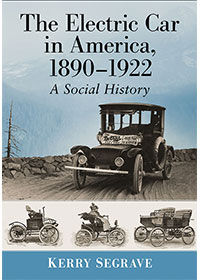 The electric vehicle seemed poised in 1900 to be a leader in automotive production. Clean, odorless, noiseless and mechanically simple, electrics rarely broke down and were easy to operate. An electric car could be started instantly from the driver’s seat; no other machine could claim that advantage.
But then it all went wrong. As this history details, the hope and confidence of 1900 collapsed and just two decades later electric cars were effectively dead. They had remained expensive even as gasoline cars saw dramatic price reductions, and the storage battery was an endless source of problems. An increasingly frantic public relations campaign of lies and deceptive advertising could not turn the tide.