Colored Travelers: Mobility and the Fight for Citizenship before the Civil War 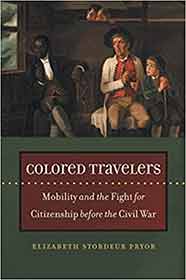 Americans have long regarded the freedom of travel a central tenet of citizenship. Yet, in the United States, freedom of movement has historically been a right reserved for whites. In this book, Elizabeth Stordeur Pryor shows that African Americans fought obstructions to their mobility over 100 years before Rosa Parks refused to give up her seat on a Montgomery bus. These were “colored travelers,” activists who relied on steamships, stagecoaches, and railroads to expand their networks and to fight slavery and racism. They refused to ride in “Jim Crow” railroad cars, fought for the right to hold a U.S. passport (and citizenship), and during their transatlantic voyages, demonstrated their radical abolitionism. By focusing on the myriad strategies of black protest, including the assertions of gendered freedom and citizenship, this book tells the story of how the basic act of traveling emerged as a front line in the battle for African American equal rights before the Civil War.

Drawing on exhaustive research from U.S. and British newspapers, journals, narratives, and letters, as well as firsthand accounts of such figures as Frederick Douglass, Harriet Jacobs, and William Wells Brown, Pryor illustrates how, in the quest for citizenship, colored travelers constructed ideas about respectability and challenged racist ideologies that made black mobility a crime.