View from the Street: The Buenos Aires Metrobus

In 2014 Buenos Aires was awarded the 9th annual Sustainable Transport Award. The city received this international honour for improvements regarding urban mobility, including a reduction of CO2 emissions and the introduction of safety policies for pedestrians and cyclists. The single most notably cause of the award, however, given its visibility, level of investment and transformation of the urban fabric was the introduction of the so-called Metrobus along 9 de Julio Avenue in the very heart of the Argentine capital. This impressive mobility infrastructure replicated the successful Bus Rapid Transit (BRT) applied in other major Latin-American cities.

The award is a good excuse to compare, from a view from the street, discourses and practices about BRT. Following a new fashion in urban mass transit Buenos Aires’s Metrobus consists of a separate lane allocated to normal buses with stations every 400 meters. The system was applied in three corridors with the intent to create a network (see Fig. 1). The Metrobus’ most important difference from the classic BRT model is that it is based on existing bus routes. As such, there was no need to reorganise bus routes in order to simplify and make the public transport system more efficient. 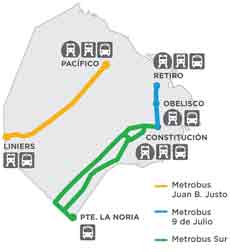 Both academics and citizens were surprised by news of the award. Hearing of it, I was encouraged to personally experience the three routes for myself. As an ethnographer in motion I have sought to reconstruct what one feels as a pedestrian – perhaps one of the most under-investigated characters of mobility studies. My first impressions revealed the disparity of the three Metrobus lines in terms of investment, design and materiality. In reflection of a long tradition in Argentinean public works, I could indentify incomplete works, missing details, and also different kinds of materials used in each of the lines. While iconic and more visible places in the city including, for example, 9 de Julio Avenue display more refined work, with a well-defined infrastructure, in the poorest neighbourhoods the exclusive lane sometimes disappears and the buses then run along with the general traffic.

Looking at the first and oldest Metrobus in Buenos Aires (Juan B. Justo Avenue), paradoxes immediately arise when one remembers that authorities and experts said that it was a copy of Bogota’s experiences. Here two bus lines run through the entire corridor, but only a few of the vehicles that use them were transformed into high capacity articulated buses. As a pedestrian I observe the two bus lanes without traffic and the remaining four car lanes crowded. Mission accomplished: buses seem to travel faster than cars. However, the bus lanes are laid out in the middle of the avenue, which means that the only way a pedestrian can access a bus station is via the corner of the block. This layout aims to prevent cars from using the bus-only lanes (something achieved mainly by physical barriers as Fig. 2 shows). Another problem is orientation as little information is offered about routes by posters and display boards that seem to be more concerned with providing space for commercial advertising. In short, the Metrobus here provides an example of road engineering that unfortunately fails to appreciate pedestrian mobility. 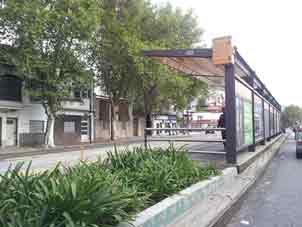 The second Metrobus (9 de Julio) was designed to serve as a symbolic urban landmark that was composed by an excellent piece of road engineering. Yet at the large and continuum platforms one feels saturated by information that instead of helping sometimes makes reading and orientation more complicated. One of this line’s main features is the reversal of the traffic direction in its bus lanes in order to prevent cars from using them – as if the concrete barriers and traffic police were not enough. An expected positive effect of this Metrobus, apart from accelerating bus traffic, was that the narrow streets of the downtown would be free of buses so that pedestrians could use them better. To encourage this kind of mobility is great, but when one needs to reach a bus station in the middle of what is known as ‘the widest avenue of the world’ (see Fig. 3) access on foot becomes a problem. Paradoxically a Metrobus passenger, who saves time on the bus, spends much more walking to reach a bus station in the first place.

Another of my observations was this Metrobus line’s lack of connection with other transport modes including the underground railway network. Considering that a Subte line (carrying around 350 thousands passengers per day) runs beneath this Metrobus line, I asked myself why no stairs and elevators to link both modes of transport were installed. It seems that inter-modality was not criteria that was considered when allocating the Sustainable Transport Award.

The third Metrobus crosses the southern districts, most of which are disadvantaged areas. A very wide boulevard was chosen in which two central lanes that respected the traffic direction were laid out. Many regular bus routes use this corridor, and I observed both chartered buses and informal and unregulated small buses known as “combis” travelling along it.

In some places engineering solutions are still needed in order to solve complex turning manoeuvres for buses although the possible problems this scenario can cause is eased by the fact that there isn’t much trade traffic in the avenues of the corridor, except in the area near Constitution during peak hours. The distance between stations is longer on this line and so the pedestrian must walk further. This line has clearly been given less importance by the city government and in fact is still unfinished and only projected in certain stages. The “Soldado de la Independencia” stop, for example, is still waiting to be connected to the adjacent and earlier tramways system (Fig. 4). As such, this corridor might be better interpreted as a neighbourhood improvement enterprise rather than a mobility solution. Ultimately, it is an example of an unfinished infrastructure with very poor service information at stations, which once again confuses the user. 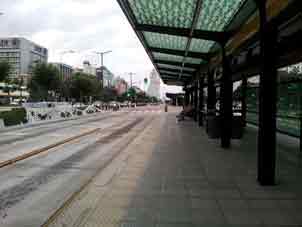 Figure 3. An example of the large and continuous platforms of 9 de Julio Metrobus 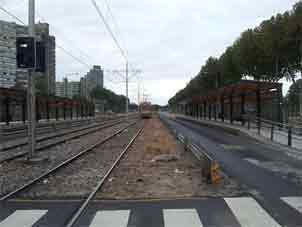 Figure 4. A Metrobus Sur station without connection to the pre-existing tram network

The Metrobus system is a good attempt to improve public transport in Buenos Aires, however, it seems that it was not imagined or planned to integrate other modes of transport. It may have been well planned as a civil engineering work suited for bus and car circulation but it failed to consider its everyday consequence for the pedestrian and other forms of mobility. Given this I would interpret it more as a cosmetic and marketing operation than a truly sustainable intervention in the city’s mobility provision.

Maximiliano Augusto Velazquez
Maximiliano Augusto Velazquez is a sociologist of the University of Buenos Aires (UBA), specialized in Urban and Regional Planning, and a Research Fellow at the Metropolitan Area Centre of Transport Studies, UBA. He is also a lecturer of Graphic Design at the School of Architecture, Design and Urbanism, UBA, and of Technology Rail Transport Management at the School of Management and Economics, University of Mercantile Marine. He currently coordinates the Argentinean University Network of Transport.