View from the Street, Paris

An urban geographer, mobilities scholar and avid walker, my view from the streets of Paris during the recent T2M conference could only be pursued through flâneurie—by a measured and deliberate meander through the city.  Of the many ways to explore mobilités in the Paris region, slowly strolling the boulevards and passages of the city seemed de rigueur.  A well-trodden concept in the humanities and social sciences, the subject of the flâneur emerged in the work of French poet Charles Baudelaire, most notably in his iconic poem “A une passante” in 1857 and his 1863 essay “The Painter of Modern Life”. The subject of the flâneur was later expanded in Walter Benjamin’s Arcades Project between 1927 and 1940.  The flâneur as a privileged (and distinctly male and affluent) urban figure is inextricably linked to the advent of modernity and represents an entitled response to the Haussmannization of the urban form of Paris.  The flâneur’s pace is leisurely, with unfettered access to public spaces of the city, especially on the sidewalks and in the spaces of consumption exemplified by the passages of Paris—the shopping arcades that serve as the precursor to the contemporary shopping centre.  Baudelaire considered the flaneur to be a botanist of the sidewalk who seeks to become one flesh with the crowd.  In 19th century Paris as well as in the contemporary, the sidewalk is the laboratory for the flâneur. 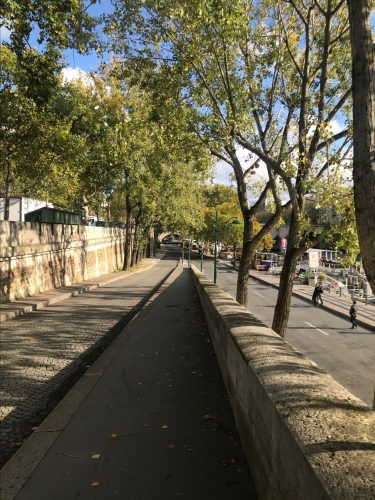 When I first visited Paris in the late 1980s, visitors like myself were warned to keep an eye to the pavement underfoot, in order to avoid dogs—and especially their excrement—that resulted from Parisians’ love of canines and walking. While the urban form of Paris has changed little since that time, today’s experience of flâneurie in Paris is complicated by a range of mobility practices that compete with pedestrians on the city’s sidewalks. The challenge of  contemporary flâneurie on the pavements of Paris comes not from pets, but from micro-mobilities.  For tourists and residents of Paris, a new form of urban strolling, at a must faster pace, has taken precedence, in what we might call e-flâneurie.  This form of flâneurie is accomplished using one of the many e-scooters available in Paris like other cities around the world.  It does not take long to see how they have taken over the sidewalks and streets of Paris.  Beyond the context of Paris, the site of e-scooters has become a symbol of the platform economy and its use in enabling mobility more broadly, including e-hailing, car-sharing, and micro-mobilities using e-scooters such as Lime and Jump (owned by e-hailing giant Über).  These tools of the digital age have proven useful during recent public transportation strikes in Paris, where RER and Metro lines came to a standstill.  E-scooters appeal to many urban residents because they are plentiful, inexpensive, and provide very rapid transport through increasingly congested cities.  Their size, speed and ease of use enable access to the city unlike Baudelaire or Benjamin could have imagined.  At the same time,  the ubiquity and growth of e-scooters in Paris has created an over-supply, and has led to them being considered by many to be a nuisance.

During my strolls through Paris, the sight of e-scooters was unavoidable: In one instance, I saw a couple in a fast-paced embrace as they cruised along the Seine in-tandem on the same e-scooter.  The tiny electric motor whined at a high pitch as they darted past me.  In another I witnessed a young urbanite with suitcase braced between his legs, guitar slung over his back, and mobile phone clenched to his right ear as he sped toward Gare du Nord.  E-scooters are everywhere in Paris.  They litter the sidewalk, sometimes standing alone, but often in clusters around popular stopping points such as metro stations and universities.  Muddied ones fished from the Seine are found lying lifeless on its banks.  Others sit abandoned in lonely sidestreets with only a faint red glow to indicate that it is in desperate need of charging.

It would seem that the ‘problem’ of e-flâneurie reached its crescendo around the time of the T2M conference in October 2019, as only a few days later, the French government began to introduce laws to clamp-down on their use, including minimum age and speed restrictions,  and prohibiting their use on the very place the flâneur calls home. The sidewalk. 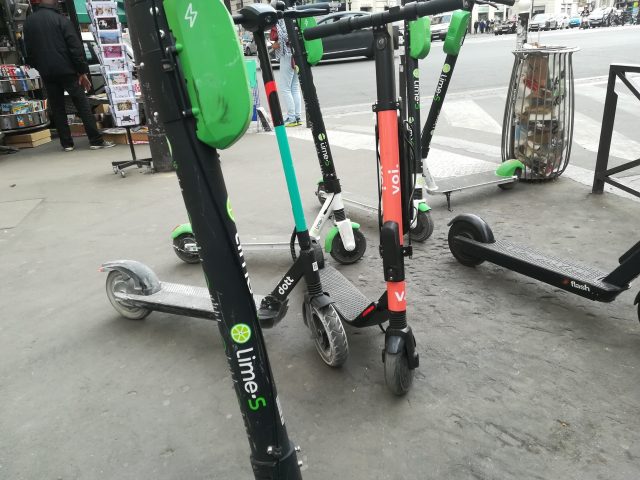 e-scooters on the streets of Paris (File licensed under the Creative Commons Attribution-Share Alike 4.0 International license)