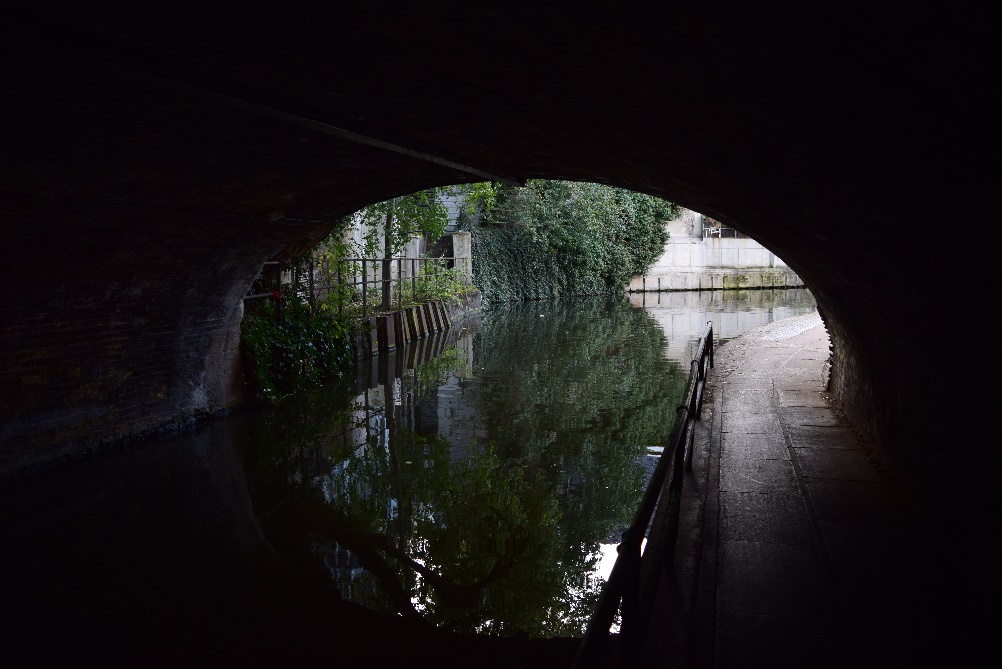 Walking has become desirable as much as fashionable in the context of sustainable mobility policies and mobility studies, respectively. But walking can be pleasant, stressful, or dangerous according to when, how, where, with whom. In the last years, I have become involved in cycling activism, but I must confess that, for me, the best way to get the sense of a place is by walking; one goes slower but, also, I feel I have the chance of stopping and looking at details.

London is for me a walkable city: not only streets and alleys, the embankment, the Barbican Centre, or parks but the canals invite me to walk. They are particularly a great space for walking and rest. This space of circulation for boats is an interesting place where history, water, infrastructure, social groups, distinctive sounds and smells, diverse types of mobilities meet up creating a peculiar rhythm -still urban, of course, but a different kind.

I know London very well as I lived there between 2007 and 2012. In November 2017, I went back for the first time since I left it. It was an emotional journey, indeed: full of memories and nostalgia and certain anxiety. Taking the canals for a walk was, in fact, a relief and good solution to the multiple options which came to my mind when I arrived. It was a good way to avoid nervousness, for the reasons I will depict below.

I had planned to walk parts of the city which I could not know when I lived there. The first tour I planned was A Clockwork Orange urban stages, but a scripted mobility also caused me anxiety. So, I abandoned any plan. It was the second day there when I took Regent’s Canal in Angel as I decided to walk from there to Russell Square. In fact, the canals were in my mind before going to London. In my recent interest in water and cities I came across Iain Sinclair’s Lost River of London which triggered my interest in coming back to the canals.

Regent’s Canal was familiar to me. The section between St. Pancras and Regent’s Park used to be my usual walking when I lived around Russel Sq. I loved Autumn and sunny afternoon for going down the canal, especially when I was stressed with my thesis writing. Walking the canal was relaxing, quiet, old-fashion, and, although it seems to be always the same landscape, it changed. I also recalled the section in Hackney, near Victoria Park, particularly a gasometer beside the canal. Loved how the canal seems to be an extension of the backyards or how alongside the canal you can find a stove that people who live in the boats use for cooking (using public space as a domestic one).

That day I took Regent’s Canal from Angel for the first time (between Angel and Hackney it is tunneled). It was a sunny Autumn day, cool and the sun was so bright that the rays reflected in the water -revealing that the canal is not deep. It was about noon, I bought a sandwich and looked for a bench to have a lunch there. Going down to the canal from the street feels like a threshold, one immediately feels the change between the surface and under the ground level. It is, although the landscape is completely different, like taking the Tube: one was descending into another space. Passing under the several bridges (for railways or streets) which cross the canal recalls us that spatial feature. The pipes which cross over the canal alongside the bridges recall me that I am walking through a network of infrastructure, conducts (of water, people, vehicles, electricity).

Boats and ducks moving slowly melodiously assemble with people’s walking. I’d like to say that even cyclists participate in this assemblage but, surprisingly (or not), I found cycling as interrupting, almost annoying. This was new for me as I used to bike through the canal or share with cyclists when I walked. But in the last years urban cycling grew in the city and it is very notable. Also, it is the speed of bikers that is notable. Sharing the paths alongside the canal was always “complicated” or, at least, it required a space negotiation to see who passed first under a bridge, for example. It was kind to hear a bell or “excuse me” when they want to pass with the bike, particularly when they are coming from behind. That is why I was surprised not only by speed but the lack of courtesy. The tiny space for sharing our mobility needs certain coordination and politeness. The calm, one of the main characteristic of this space, was broken somehow.

This experience was more terrible in the East side where the canal has become a sort of cyclist shortcut to the Eastern districts. Probably more people who work and study in the central area are living in the gentrified East London -the Olympic District is the epitome of such urban transformation. Gentrification probably is altering the mobility experience alongside the canal: for me this is evident in St. Pancras where the renewal of the area has changed the canal landscape with an interesting but polemic public space -a sort of “terrace”- which, actually, bares or shows up the canal. Such openness, in my opinion, is breaking the harmony of a semi-covered space. The open space can invite people to enjoy the canal but, at the same time, that space is part of a property speculation where new buildings are rising (even the old gasometer has become a high-class residential building).

It is difficult to say to what extent the new buildings and uses of spaces will alter the canal life. I guess it is the calm rhythm and the landscape of the canal what makes it valuable for property market. The slow motion of boats, ducks, and pedestrians remind us that another rhythm – different from speed and stress – are possible in the city. The canals are like a break, a pause, in the frenzy metropolis, but we need to pay attention to the effects of the commodification of slowness.