The operation of Donbas’ tramway and trolleybus networks under warfare

Throughout the recent months the attention of many of us was riveted to the news from East Ukraine. The military actions in the Lugansk and Donetsk regions have been destroying the everyday environment, forcing people to seek asylum, to commute for long distances in order to receive social payments in cash (since the banking system runs unstably in the region) or to avoid mobility due to anxiety. Even the most routine forms of mobility are conjugated with the loss of life. It was reported in Gorlovka that two people perished at a transit shelter; several similar reports came from Donetsk (including of bus drivers killed in accidents); and this list of losses may grow further. Elements of transport infrastructure become a primary target of attacks and scene of military actions. Here the bombardment of the main bus station in Donetsk is a flagrant example. Several airports became battlegrounds and were turned into ruins. Bridges have been exploded in Gorlovka and Donetsk disconnecting the districts from the central part of cities. Vitally important railway connections to the rest of Ukraine are therefore no longer functioning. 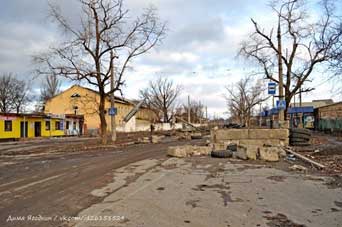 Along with the general dreadfulness of any warfare, the developments in Donbass are also a black day for the history of urban electric public transport (hereafter – EPT). This short report features data on this particular mode of mobility which has been of a specific importance for urban life in this region. As of late 2013 the Donetsk oblast was an area remarkably rich in such transport with seven tram and nine trolleybus networks, while the Lugansk oblast had one tram and six trolleybus networks. Historically Donbas’ EPT presented a rare derivation from the top-down transport planning approach of the Soviet epoch. These networks were opened in the time of the USSR, when EPT was considered necessary for larger cities. At that period, opening a tramway or trolleybus in a small town was reflective of both an expectation and promise that it would undergo rapid growth and development in the near future. In many cases these predictions did not come true. Thus the very existence of functioning infrastructure fulfills a significant social role – it does not only serve the present day of urban community but also implies hope for the days to come.

One more argument for using EPT in this heavily industrialized area is the environmental one. Yet, like many other post-socialist spaces, Ukraine has witnessed the decay of its (almost exclusively municipal) EPT since 1990s. However, by 2013 only 2 of 25 tram and 3 of 46 trolleybus systems were closed completely. The rest have survived the aggressive rivalries presented by private mini-buses, a shortage of rolling stock and the erosion of hardware. In the late 2000s Donetsk became a unique arena for various forms of urban participation in favor of EPT including nonstandard problem solutions by transportation companies, crowd-funding projects and volunteering initiatives. Though similar initiatives took place in some other post-Soviet locations, the Donetsk region seems to have the most numerous and successful examples. To mention just a few of them: volunteers distributed the tram schedule among the local residents; concession holders voluntarily traveled at full fare; in Konstantinovka the clearing of rails in winter was conducted on a crowd sourcing principle; Gorlovka tramway-trolleybus department sold charity tickets (in addition to regular ones) in order to repair old vehicles, while the numbers of sales were regularly presented on the EPT-department`s website, giving an account to the passengers on all monetary transactions upon their donations. Passengers responded positively and thus donations allowed several vehicles to be repaired. Similar initiatives took place in Druzhkovka, and Uglegorsk, as enabled by various collaborations between local residents, fans of EPT and transit authorities. In the case of Uglegorsk four second-hand but still intact vehicles were transferred from Donetsk and Kyiv in order to support the small town`s transport. These local stories represent remarkable distinctions from the standard post-Soviet story of small towns losing their EPT without any chance to turn the process around. 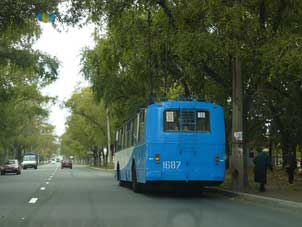 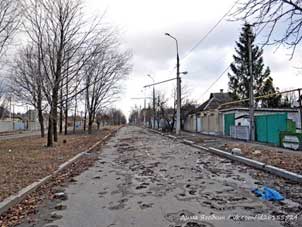 The same part of Donetsk’s Kolkhoznyi prospect in October 2009 (left) and March 2015 (right). Photos by Denis Tscherbina and Dmitry Yagodkin.

Tragically, during the last year the public transit services in the region experienced troubles; more than that, electrical transport is particularly exposed to military destruction. Trolleybuses were in some cases just scrambled by tanks (like in Krasnodon). Trolleybus vehicles were used as barricades in Kramatorsk (or demanded for that purpose in Donetsk) as they do not have gasoline tank inside (and therefore are not explosive). Tramway depots have been occupied by military units (such information came from Konstantinovka) – probably due to their suitability for long-term stay (though not being accommodation spaces, these buildings are somehow adjusted for sleep and hygiene procedures of shift and technical workers). This makes these places particularly targeted by bombardments. In Donetsk several trolleybus and tramway lines are defunct (mostly at the city`s margins) are defunct (mostly at the city`s margins).

In Avdeevka the part of tramway line at the outskirt of the town was dismantled because of warfare and marauding acts. For some small transport enterprises the warfare became pernicious. In Lugansk local electric public transit has ceased completely since July 2014. Uglegorsk’s transport network stopped in August due to cannonades, numerous disruptions of overhead wiring and since then the rolling stock parked in its depots has been ruined. The commentators also note that the coalmine – the object that used to produce vast passenger flows – will probably cease to work forever (and therefore the line will no longer be in demand in this part of town). 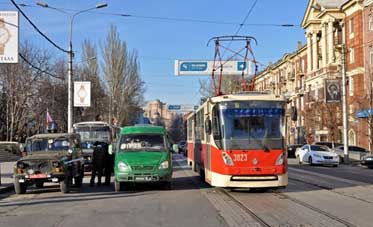 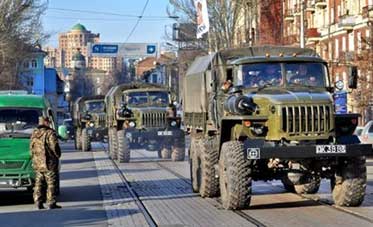 The vulnerability of the basic life maintenance networks and systems is a leitmotif of “securocracy” paradigm noted by Allen Feldman in his contribution to Stephen Graham’s edited volume, Disrupted cities: When infrastructure fails (2009). Claiming to not be directly mortal for residents of housing areas, in fact, infrastructural disruptions vicariously affect the largest numbers of people – especially those ill, old or very young. In Ukraine these last three categories were mostly using cheap (or free) municipal transportation (as represented by EPT) while the passengers with higher incomes preferred faster (and more expensive) mini-buses, taxis and cars. Now the situation is sadly equated for many, since private operators have been reported to reduce service radically due to deficiency of fuel. A dramatic decline in bus operation occurred in Donetsk (only 3 municipal lines now function), so the electric transport takes the major share. People have to crowd vehicles notwithstanding the recently widespread fear of using the transport system in the first place fear of using the transport system in the first place. In Alchevsk, residents sounded the alarm using social media after observing the unknown flashes of light on the streets though it was actually just the removal of ice from the trolleybus wires.

It is noteworthy that the background of two decades of crisis conditions today enables some quick transportation solutions and debugging on both sides of the frontline. In Slavyansk services on undestroyed part of the trolleybus network were reinstated by U-turning without loop, just masterfully using the existing “triangle” of overhead wiring. A loop in Enakievo was three times broken by shelling but each time repaired in a few hours (!). In Konstantinovka, despite the fact that military units occupy the depot building, the tramway line continues to function. Another result of the attacks is the transfer (or leasing out) of trolleybuses to Hartsyzsk from Donetsk that has some surplus of rolling stock because of several line closures. In Krasnodon, with the monetary support of a steel company, a new vehicle (manufactured in Ukraine) was delivered in December 2014. Together with new Russian tramways that appeared in Enakievo in 2012, or, a year later, both Donetsk and Kiev trolleybuses coming to Uglegorsk these examples may illustrate how maintenance of transport infrastructure was and persists to be less biased to politically constructed obstacles and how it benefits from the borderless circulation of artifacts.

The main source of information for this consolidated report is transphoto.ru – a web-host where enthusiasts accumulate multifarious records of what is happening to EPT infrastructure all over the world. From unaccredited sources there is evidence that the website might undergo a kind of censorship in displaying the information from Donbas – at least due to the fact that photographs of the public transit infrastructure may also occasionally capture the bitterly contested facts. Since repairing the lines takes time and investment, electric transport is unlikely to be repaired in the short term perspective. Post-war renovation could become the point for tackling the stagnancy of transportation infrastructure but this is not necessarily the case. In Lugansk it has been announced that the main tramway line (number 6) will not be recovered in the future (because of “monetary reasons and the expensiveness of maintenance”). Local authorities are indicating in interviews for the media that trolleybuses and trams in Lugansk regions are probably too expensive.

The dreadful ongoing developments in Donbas are educative. Being not more than distant observers of the situation, researchers can thoroughly accumulate the data from the field. Maybe we should turn our sight to depressive mobility infrastructures to learn something to prevent depression in more sustainable locations, as well as to complete the broad theoretical schemes with empirical knowledge of local practices. These examples illustrated the (untypical) solicitous attitude of populations towards their infrastructure. In peacetime much effort was invested in preserving the tramway and trolleybus networks, but this was only possible given the absence of any articulated intentions from the decision-makers in charge of EPT. Thus, where regulation was scarce, local self-organization occurred; if the amateurs were eager to assist the professionals, they were allowed to do so. Documentation of the wartime operation of Donbas EPT may help us to re-approach the social meaning of municipal and electric public transit, as well as troubleshooting practices in critical situations. Although Donbas EPT is now facing the extraordinary conglomerate of problems, particular aspects of these hardship are relevant for mobility assemblages worldwide.