T2M Secretary Dick van den Brink heads east and doesn’t get stopped by the police once.

After a couple of road trip holidays where we drove around Europe with a couple of friends, we were kind of fed up with traveling Western-European countries, where everything is completely organized and no unforeseen things happen. Our next destination had to be adventurous and we guessed Russia would be it.

Some friends declared us insane as it was, according to them, dangerous and much too far for just two weeks. Questions we asked ourselves beforehand were: ‘is it doable to travel around in these countries’ and ‘what is true about the stereotype image of the Russia culture we imagine’?

Of course it isn’t just a country where you pop up at the border and show your passport to enter it, this requires a slightly better preparation. You need to:

The journey started in the centre of the Netherlands and went through Germany, Poland, Lithuania and Latvia. What is interesting is that travelling by car is that it shows the transitions between the Western and Eastern European countries. What caught my attention was the fact that in my country (Holland) everything works according a system, the opposite of Eastern Europe, for example in the trafc system Where in Holland we depend on a system, in Russia its all improvisation Drivers just overtake other road users even when there is a car coming from the opposite direction and all the road users will adjust to avoid the collission by going a bit to the side of the road.

The following days we drove to Tula, via Smolensk, which is known for the famous battle of Smolensk between the Russian and French army in 1812. In Tula friendly Armenian potato farmers invited us to a BBQ, a great experience with eating Shashliks and drinking Vodka in the forest. Nice detail was the police ofcer – who also was invited – stepped totally drunk into his police car and drove away. Some of the stereotypical images have proven to be true.

Our trip continued through the Golden Ring, a ring of cities located North East of Moscow. These ancient towns have played a signicant role in the formation of the Russian Orthodox Church and also have been called open air museums as the main events of Russian history took place in this area. This explains the many interesting and varied architectural monuments. But it is not only the architecture that is impressive. Also the scenery is wonderful, like the Volga with the picturesque riverbanks where people are shing and picnicking.

To conclude the trip was a great adventure and gave us a rather good look into Russia and its culture. Besides that, it isn’t to difcult to travel around, as long as you start well-prepared, and adapt to the rules. Before the trip, we were warned about the police, but we weren’t stopped on a single occasion. In total we drove 6800 kilometres in 15 days … 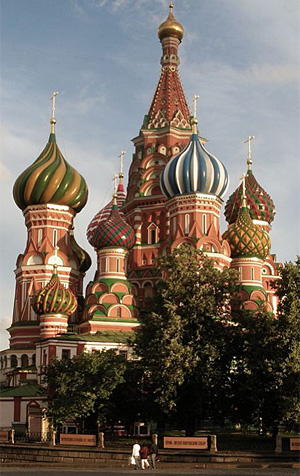