A View from the Streets of Leuven

Maggie Walsh forsakes her Easter Break for the small Belgian city of Leuven.

This year the mid year meeting of the T2M Executive was held in Leuven in Belgium. Though not as large or as world-famous as Paris, the venue of the two previous mid year meetings, Leuven, population ca. 90,000, had enough attractions to cater to any new tourist. Arriving from the East Midlands at Brussels National airport, it was a quick trainjourney to Leuven, some 20 Kilometres away and a short walk down Bondgenotenlaan, a street with a variety of stylish shops as well as cheaper department stores, to the nominated hotel. The Information Bureau just round the corner provided a city map and guidance about tourist high spots.

The Groot Begijnhof or Great Beguinage, a UNESCO World Heritage monument consisting of around 70 houses and convents and a church provided a fascinating historic walking tour. The oldest of the buildings date from the 16th century, but the majority date from a century or two later. They are now inhabited by some of Leuven’s 22,000 students. Nearer the centre of the city stands Sint Pieterskerk or the Church of Saint Peter, a striking example of High Gothic architecture dating from the 15th century and the Stadhuis or Town Hall, another magnificent High Gothic work of art dating from the mid 15th century. 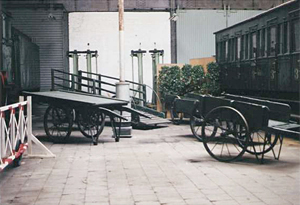 The Executive Committee had its own tourist or perhaps specialist trip to the warehouse of the Railway Museum of the Belgian State Railways. The warehouse, a former workshop where railway equipment was repaired and where the drivers had their depot, currently houses a wide selection of rail heritage ranging from signaling and lifting equipment to a royal train and a Belgian high speed steam engine. An enjoyable time was spent roaming through and looking at carriages and trains and all who visited hoped that these exhibits would soon be better accommodated and more securely protected as well as being available as one of the excursions from the 2007 T2M conference to be held in Holland.

The visit to Leuven, however, concerned much more than tourism. The Executive Committee of T2M spent much of a full working day on the business of the Association. Thanks to the intervention of Paul Van Heesvelde we were able to meet in the Conference Room of De Lijn, the Flemish public transport company which operates some 800 buses. As a bus historian I was very pleased to learn that travel on the buses operated by Vlaams-Brabant is free for Senior Citizens and has concessionary fares for those under 25, measures which encourage the higher use of public transport and designed to reduce heavy congestion.

The Executive Committee meeting focused much of its attention on the Association’s constitution and internal regulations. Though such items may seem distant and remote to most of you as members, they are essential to the legal standing and the smooth running of T2M. In the near future you will receive electronic copies of these regulations with a view to voting on these at the Annual General Meeting, thereby placing T2M on a regular constitutional footing. The Executive Committee is very grateful to Paul Van Heesvelde and Clay McShane for extensive work on the documents and to Paul Van Heesvelde for translations as the official documents will be in Dutch.