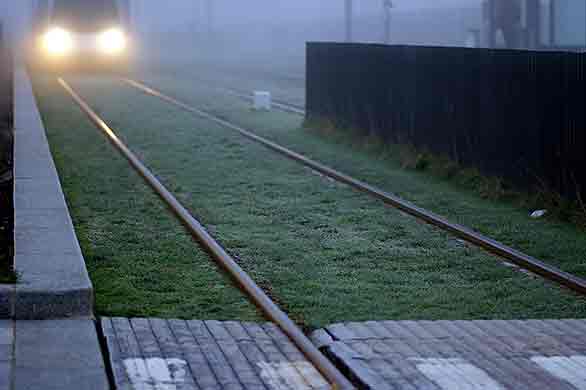 The “View from the street” articles generally aim at providing a peculiar drawing of a city only by looking at its streets and at its mobility systems. That’s why the author tries to point out the main specificities that he or she can identify and that are a key to describe the city. In the process he or she may forget what is finally more significant for the city and which is in fact common to every cities of the same size in the area or in the world. Maybe because there is a paper to write ! But maybe also because, it is a common place to consider that our cities share a lot of basis in their mobility models. For instance, car holds a key-role in every city – except in Venice ? We all know that cultural uses of mobility systems differ from a city to another. But, we must not forget the powerful ability of transport systems to feed homogenization forces. The example of the French cities renewed by the so called “modern tramway” is really interesting from this point of view. Only 3 cities in France had kept their old tramway lines after the 1960s. For 15 years now every French city of about 200 000 inhabitants and more has made the choice of building new tramway lines. The new tramway has become fashionable!

The interesting point is that this wave of tramway building has produced a new urban landscape. This new urban landscape is, I suggest, an efficient means of homogenization, mainly of city centers, but also in the suburbs where tramways run. The same ingredients are used in order to redesign the cities. Both of them are significant: granite and grass.

The ingredient of granite is a symbol of the prestige generally given to the project. The use of granite can be justified by the average cost of such lines, about 30 millions euros/km! Granite is used to underline the borders between the space given to the tramway and the general public space shared by other users. The design of stations may also be based on granite. We have granites resources in France (Britanny, Auvergne), but it must be said that the granite used in these tramway projects often comes from China!

Grass is our new urban paintbrush. Where possible, the track is covered by an ever green grass, last expression of the French culture of gardening, inherited from Versailles! All the year long, the grass should be green and is therefore generally depending on a sophisticated system of watering.

So the generalized use of two very contrasting materials, the ultra-resistant granite and the fragile grass reveals the two main engines of tramway projects: the political signification of a solid infrastructure and the ecological justification of greener systems of mobility in the frame of the so-called sustainable development.

There is now a common landscape in French cities. Various factors have had an influence in this development. The standardization of technical specifications and rules nationally for these projects is a factor and possibly also the role of organizational bodies for architects, landscape designers and town planners in standardizing thinking. The effects of this common landscape in French cities may be more efficient than previous waves of urban planning, such as the haussmannisation process between the 1850s and the 1930s. Transport, of course, is not the only vector or channel for the dynamics of homogenization to be observed. For instance, the evolution of the commercial structure also explains the new aspect of cities. The generalization of a dual model, based on big commercial centers in the peripheral areas and shops operated under licenses of international brands in the city centers, is also probably one of the more important urban phenomenon of the last decades. And both are strengthening each other.

The last evolution of the process is the incorporation of artistic perspectives around tramways. It is an old habit in French projects but it has been recently particularly put in the spotlight with the opening of latest Parisian tramway, in December 2012. Works by international artists are installed along the line and try to offer simultaneously useful tools, such as benches, and aesthetic emotion. So that the tramway, which we were used to consider as a urban project and not a transport project any more, has now become a cultural project. A new expression of national design of city landscapes ?