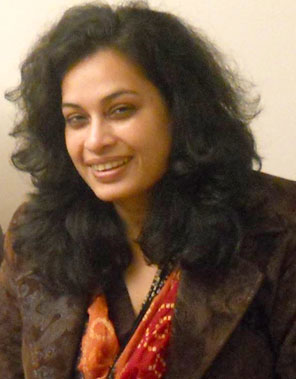 What are you working on at the moment?

I have recently submitted a monograph on train journeys in Hindi cinema to the Indian Institute of Advanced Study in Shimla, India, where I was a fellow for the last two years. In this book, I look at issues of cinema, its aesthetics as it developed alongside the introduction of railways as a mode of mass travel in India, the presence of technologies of mobility in everyday life, and the all-important issue of technologic modernity in India, as shown in Hindi cinema.

Tell us a bit about you. What sparked this research interest in train journeys in Hindi cinema?

I teach English literature in the post-graduate department of English at the Regional Institute of English in Chandigarh, India. My interest in cinema dates back to the days when I did my PhD on the film adaptations of EM Forster’s novels in 2004. During the course of my PhD, I had the opportunity to do a film appreciation course organized by India’s well known film school, Film and Television Institute of India and the NFAI or the National Film Archives of India in Pune, and later as a Fulbright fellow I audited a few courses at the department of Cinema Studies in New York University.  There for the first time I became aware of the deep interconnections between the railways and the cinema. Also my own experience of train travel in India was deeply instrumental in fuelling my interest in railways as an area of research.  In India, railways are the quintessential mode of travel for most middle-class families. The railways in India are, as is often said, the life-line of the nation.  One cannot divorce the life of the nation and the lines of the railways in constructing any narrative of India as a modern nation.

Later in the year 2006, I was approached to write a research article for an edited volume on the partition of the India. I decided to look at train journeys made during this ill-fated time and found that a number of short stories and novels existed in Hindi, Urdu, and English (and in other Indian languages) on the theme of train travel during partition. This resulted in my article, “The dance of death on the highways of steel: reading train journeys in partition narratives” published in Reading Partition/ living Partition edited by Jasbir Jain, published by Rawat publications in 2006. Soon after in 2008, I was asked to write an essay on Hindi cinema for an edited volume to be brought out during the 14th Lyon Asian festival, 2008. Once again, I decided to look at train films from the earliest period of Hindi cinema and wrote a small article, “Train journeys in Hindi cinema” for Indian Cinema/ Le cinema indien published by Asiexpo in 2008.

What differentiates Hindi cinematic representations about train journeys from other South Asian cinema?

This is a tricky question to answer. One, Bollywood is a recent nomenclature. It is only in the early 1990s that this term became common currency and replaced the earlier name Hindi film/cinema. Hindi Cinema or Bollywood has a deep and abiding influence on popular film culture all over South Asia. In fact, before the partition of the subcontinent there was only one film industry in Bombay, or what is now known as Mumbai, and it had a substantial reach all across South Asia. In fact, even the term Hindi cinema does not capture the essential contradictions of popular Hindi cinema in India. Urdu and Hindi were, until late nineteenth century not differentiated as two separate languages, but were considered one. Nationalistic politics and language chauvinism of pre-independence days led to the separation of the two languages, with Hindi becoming the official language of India and Urdu the language of Pakistan.

For various reasons Bollywood continues to be the most visible and available cinema of South Asia, with films from neighbouring Pakistan and Bangladesh being almost absent from popular memory in India. This has led to a near absence of cinemas from these countries in the public sphere of India.  Hence it would be difficult to say what the difference between Hindi cinema and cinema of other South Asian countries could be regarding train travel.

Are you observing an interest in mobility or transport/mobility history amongst your literature students?

How is the T2M network developing on your side of the world?

T2M is barely two years old in India. But in the last two years alone it has made its presence felt, first by way of its seminar in New Delhi in 2010. Its office bearers and members have made presentations at various places in India including the Indian Institute of Advanced Study in Shimla on mobility related themes. At the same time T2M has offered travel assistance to Indian researchers to attend conferences and Summer schools abroad.

In fact, it would not be impertinent to point out that the entire region of South Asia is waiting to be written about as far as issues of mobility, transport and traffic go. South Asia along with other countries in Asia offers a crucible to examine cherished theories of mobility and modernity. T2M has rightly recognized this and is working towards that end, though a great deal still needs to be done.

What is needed to help mobility and transport researchers in South Asia connect better with each other?

Networks like T2M would help tremendously in creating intellectual awareness regarding the importance of transport studies in South Asia. So far, there are hardly any departments of travel, transport and mobility in South Asia, and in India in particular. This is a big lacuna in the ways in which we approach the idea of development and progress in South Asia. Most Indian cities are nightmares as far as transport and mobility are concerned. The focus of development being mostly on private modes of transport.  What is deeply distressing is that in most cities in India pedestrians and cyclists are given short shrift while constructing roads, leading to a high rate of accidents.

To begin with it would help to have an Indian chapter of T2M or something similar to help researchers of transport connect with one another.  Conferences, talks and exchange of research scholars working on areas of transport, traffic and mobility could be another way of creating a network of scholars. It would also help to expand the field of transport studies by including other disciplines like English, Hindi, Cinema, Sociology and History. This would create a wider audience and awareness regarding issues of mobility.

More travel grants should be provided to South Asian researchers, as also concession in registration fee and lodging facilities. The disparity between the Euro/ Dollar and Rupee is just too big to enable people from South Asia to travel abroad frequently to participate in seminar and conferences. It would also help to create possibilities for student and faculty exchange between different universities in India and abroad.