In the Spotlight … Mathieu Flonneau

In this Newsletter’s ‘Spotlight’ we focus on Mathieu Flonneau.  Mathieu is a Lecturer in Contemporary History at the Université Paris I Panthéon-Sorbonne, and is a long-term support of T2M, having been involved since the start.  As well as being a member of the EC, he is known for his work on the cultures of the car and automobility in France and his irreverence! 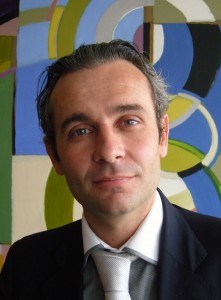 First of all, I would like to underline that you’re right to use the word “automobilism” or automotive history, and not “automobile”.   When I started in the field, the object didn’t raise much interest in me. Now I’m fond of roadside culture and even sport and motoring knowledge!  I studied general history at the Sorbonne, and then urban history but with a contemporary focus. My topic was the city of Paris during the 20th century. First, I was following classic studies – orthodox architectural and urban planning so to speak – and something struck me: nobody paid attention to the most important event: the impact of the car system. So I decided to investigate this very rich direction and I discovered that in other countries this kind of study was already written. Clay McShane’s works impressed me very much.

How did you join T2M Association?

Since 1999, I attended all the conferences and meetings of the former Mobility History Group. I would like to thank once again Gijs Mom for his trust. I met him a long time ago in Paris when he was networking in order to create the T2M Association.  It was really a great stimulation for me to have the opportunity of delivering papers in English – which was funny because I’m still not fluent at speaking this language! – and in front of famous first class scholars – in Torino, Trondheim, Munich, Atlanta, Dearborn, etc. – and at the same time to achieve my dissertation. In a quite natural way, I became one of the founder members of the association in 2003 in Eindhoven and I joined the editorial team of the Journal of Transport History. In the same year, my PhD (just defended) was quickly published in two books, which was very helpful in getting my position at the University. I still have the opportunity to go deeper into my topic, currently enlarged to the cultural and worldwide impacts of automobilism. In this way, I guess that I could be presented as one representative of the cultural turn and mobility turn historians. The “Great Paris” is still one of my research topics and that I have many projects linked to that.

With my colleague and friend Vincent Guigueno, we managed to get and lead the organisation of the 4th annual T2M conference in Paris and Marne-la-Vallée. We prepared it with a seminars series which is still running now for the fourth season. We contacted the whole academic community interested in this field and got the support of many important sponsors. By the way, we’re going to publish a collective book dedicated to this global experience. One last word about this conference in Paris: with Vincent, we’re still very proud of this event, which is not yet bypassed regarding the attendance rate!

You’ve been quite involved in the development of T2M. How do you see the organization developing in the future?

I think that the Association still suffers from a lack of visibility – that’s why I proposed the creation of a logo (see the front cover), which is now adopted to sign all of our documents. I’m involved too in the conception of the Yearbook and other opportunities. I would also like to raise a question – already raised by others during the general assembly and executive committee meeting – about the conferences: perhaps the rhythm – one each year – is too stressful. Maybe we could focus on a major event, every two years.

What do you do when you’re not working on automobilism or the city?

I like to explore unusual paths of “mobility” reading, and recently I spent lot of time with James Bond! One book that gave me lot of pleasure was written by Simon Winder, The Man who Saved Britain. I must confess too that the United States of America are for me a kind of ideal “promised land” – tempered of course with Tocquevillian arguments which I teach passionately to my Masters students in my course dedicated to US History. Recently, I attended a fascinating conference in Albuquerque (10th Preserving Historic Roads) and discovered the “Land of Enchantment”, a. k. a. New Mexico! Tied to this, my last intellectual emotions are deeply linked to the documentary Man on Wire about Philippe Petit and especially… New York before 9-11. To tell the truth, I’m very impatient to go there again with my wife and two sons –for their first transatlantic flight!