In The Spotlight – with Tarini Bedi

A conversation with our EC member, Tarini Bedi. Anthropologist, Assistant Professor, University of Illinois at Chicago. 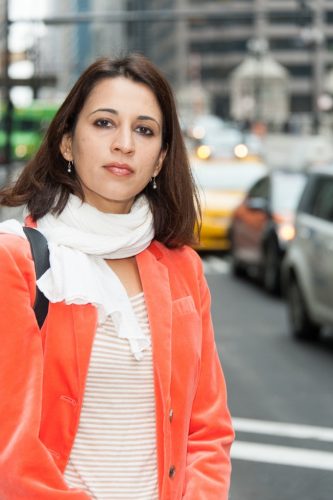 1) How did you become interested in urban mobility? Which lens do you use to look at it?

I came to study urban mobility quite by accident and now feel like everything I did before this accident occurred would have been so much richer had I been looking at my research and my fieldwork through a mobility lens! I am an urban anthropologist and my early research was on women who are part of a militant, right-wing political party in western India. For many years, I moved around with these women on various political and election campaigns across the Western Indian state of Maharashtra. I became acutely aware of the intersections between mobility and gender for these women politicos. This work became my first book, The Dashing Ladies of Shiv Sena: Political Matronage in Urbanizing India (SUNY Press 2016).  While the book is full of stories of movement of these politically influential women, when I wrote it, I never quite had an appropriate analytical lens to articulate these questions.
While I was doing this research with women who function as local political  brokers in urban neighborhoods in the city of Mumbai, their work took us to several urban neighborhoods that had sprung up around particular kinds of labor and work.  A neighborhood made up of taxi drivers and mechanics who had all migrated to Mumbai in the early 20th century to drive public service-vehicles (mostly horse-drawn carriages at the time) was one such neighborhood. Therefore, for my next project I began to conduct research in this neighborhood to trace the mobile lives of these workers for whom taxi driving was a hereditary, family trade. These drivers were also facing all kinds of new challenges as the Indian economy liberalized and as new kinds of taxi models began to circulate in India. It was after I started my fieldwork here in 2011 that I first came across the work of sociologists like John Urry and Mimi Sheller, and many of their collaborators associated with the Center for Mobilities Research  (CeMoRe) at Lancaster University. I also began to read the work of geographers like Tim Cresswell who make us think seriously not just about mobility but also about immobilities and the politics and power that surrounds questions of movement across the world.  I found this work to be really productive to think with and that is how I came to work in the mobilities paradigm but from a non-Western perspective. A couple of years ago I was fortunate to spend some time as a visiting scholar at CeMoRe where I got a chance to flesh out my rather raw ideas with a truly interdisciplinary group of scholars such as Monika Buscher and Lynne Pearce working across the humanities, social sciences, and design and arts. I have also been fortunate to have the opportunity to collaborate and work with a group of interdisciplinary scholars who are thinking about mobility from the perspective of Asia or what we are calling Asian Mobilities.  Many of the pioneers in this field are scholars such as Brenda Yeoh and Wieqang Lin based at the Asia Research Institute at the National University of Singapore. There are of course many, many others who are doing wonderful work on mobilities. I name just a few here, only to mark the fact that unlike other fields that I am familiar with, the research and thinking on mobilities is driven by an excitement and dynamism that is infectious, generous, and inclusive and therefore has the capacity to draw a lot of younger scholars in. I hope that as leaders of T2M we are able to continue to generate this excitement.

I am very lucky that I am in the discipline of Anthropology where we have the freedom to draw from and collaborate across several disciplines. Therefore, to respond to what particular mobility lens I use, I would say that I see the mobilities lens as a multidisciplinary tool-box of sorts rather than as a singular theory or lens. I delve into this toolbox when I need to and often pull out all kinds of exciting things that can provide me with both methodologies and analytical tools.

2) Your subject of study seems to be, with different peculiarities, a global phenomenon. Which similarities and differences do you find in your case study in comparison with other taxi trades.

Yes, it is absolutely the case worldwide that transport infrastructures and the taxi industry in particular are important sites where contested visions of a modern city play out between transport labor, capital investors, and urban governments and their technocratic representatives. Therefore, a systematic analysis of the labor and professional dimensions of taxi driving and the relationships of motoring labor to broader questions of the labor economy present some urgency today in many parts of the world. The taxi-industry worldwide is where debates over the sharing economy are playing out. In India, global, technology-based firms like UBER and Lyft have entered a taxi market of hereditary, kin-based taxi-cooperatives, taxi-fleets owned by large infrastructure investors, and local Indian models of the sharing economy such as Olacabs. The platform and technology-based sharing economy, personified by firms like UBER are often embraced by consumers and some governments. However, they meet widespread challenges from motoring labor. Recently, taxi-strikes and urban violence brought cities like Mumbai, Paris, and New York to a halt on various occasions. As those of us who work in cities of the global south recognize, these cities are exciting places from which to push the thinking on urban mobility.  South Asian cities like Mumbai have become laboratories for thinking about questions of transport and urbanization. Therefore, while my research is based in India, I am trying to use my work to understand mobility dynamics more broadly. Therefore, I use my research to think about two overarching questions. These are (1) when transport systems undergo rapid change how are economic, political, and labor relationships altered? (2) How and to what extent does transport labor, re-position itself within these larger political, economic, and social arrangements? These are particularly important questions not just in India, but worldwide. Insights into the changing conditions of work and livelihood responds to some of the urgent global problems in a world increasingly characterized by income and wealth inequalities.

3) Your background is in anthropology, so how did you intersect it with history? How has a historical perspective or the dialogue with mobility history helped your research work? Which challenges do you find between anthropology and history?

While working on the research for my book on the taxi industry in Mumbai I realized that I could not understand the dynamics of movement in the taxi trade in the contemporary period without thinking about how these contemporary problems were shaped and came to be. Therefore, the project began to take a genealogical approach to the historiography of Bombay’s taxi transport and mobility. Drawing from the provocations of thinkers like Foucault I began to trace the historically contested meanings of taxi transport as part of a politics rooted in present-day practices and problems. In this sense, engaging historically became the natural progression for my work; though of course, I am not trained as a historian and I was a bit at sea about how to go about accessing archives and indeed to think about the kinds of archives that would be useful to me. I think that for anthropologists, historical work is necessary; the mark of the best ethnographic work is to produce research in a deeply rooted and contextual way; if we do not engage with history we are not acknowledging these contexts adequately. I therefore do not see much tension between history and anthropology; though it has taken me some time to recognize how fruitful archival work can be for ethnographers. I think it is the nature of this current mobility project that has taught me the importance of this historical work and I now try my best to encourage my students to take historical work seriously in Anthropology .

4) What is your impression interacting with T2M (considering scholars, journals, and conferences)

T2M is really a terrific organization and I feel that my work and my intellectual life have been greatly enhanced through my engagement with those who are involved with it. For one thing, I love that it is such an international group of scholars. This is really rare and this truly global nature of the organization makes the conferences, and publications really rich. The second thing that I really appreciate is that we are such an interdisciplinary group. Additionally, while we are broad, the organization is small enough that we can have really good conversations at the conferences and at other events which I do not find I can do at the huge conferences that other professional societies host. I have really enjoyed the conferences I have attended and I have come away with many new friends and collaborators each time