In the spotlight – Paul Timms 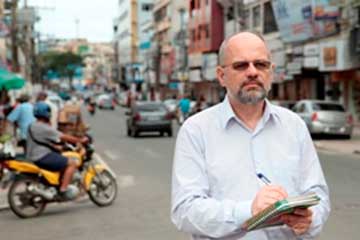 You are a Senior Research Fellow at the Institute for Transport Studies of University of Leeds, which is considered a world leader in transport research and teaching. What are for you the aspects that make transportation an intriguing and fascinating field of investigation?

Clearly there are all the standard answers about transportation being extremely important for society: this has always been the case throughout history, and is arguably more so now due to technological change, globalisation etc. On a more personal and methodological level, I find transportation “an intriguing and fascinating field of investigation” due to the heterogeneity of transport studies. Over the last 30 years, I have researched subjects varying from the optimisation of traffic signals to the future of global transport, through a variety of disciplinary perspectives from engineering to humanities. For those who like such terminology, transport studies could be seen as the ultimate academic assemblage. It would be hard to imagine how such heterogeneity would be possible in most other university departments.

The aim of T2M is mainly to promote a better understanding of historical interaction between transport, traffic and the mobility of people, material objects and ideas. This year the association is however aiming to deal stronger with the future of transport and mobility. What do you think are the most influencing drivers for change in both transportation and mobility behaviours in the next 15-20 years?

I guess that I have moved somewhat from being a voluntarist to a structuralist over the last 30 years (which I accept is a movement in an unfashionable direction). So, along with this direction of change I increasingly see the influencing drivers for change more in terms of political economy and less in terms of factors that directly influence individual behaviour. This is not at all to say that individual behaviour is unimportant, which would be a very strange ontological position. Rather it is to say that such behaviour is highly dependent upon macro-scale factors and less a result of individual volition.  Unfortunately (in my opinion) much research in transport studies makes the implicit (and sometimes explicit) assumption that problems such as lack of sustainability can be solved by appealing to the environmental consciences of individuals, with questions of political change being forgotten.

Based on these assumptions, what do you think are becoming the most pressing topics and “big questions” that should be addressed by social scientists and historians regarding the future of mobility?

Directly following on from the previous answer, I personally see the “big questions” as being tied upon with what sort of society we might aspire to, and what sort of transport system / mobility would be consistent with such a society. In simple terms, if we live in a society that is oriented heavily to competition we should not be surprised in individuals seek to be competitive in terms of having a better car, travel more etc. In general, I believe that this type of futures thinking, concerning the envisioning of a ‘new era’, will benefit greatly from the input of historians (such as in T2M) who are skilled at distinguishing between different historical eras. A big problem in transport studies is that it is extremely ‘presentist’, where the methods used for making predictions of the future implicitly assume that the future is a simple extrapolation of the present, without recognising that the present belongs to one historical era which, like all other eras, will change into another.

One of your recent articles was about utopian thinking in transport planning. How you think the ‘mobility turn’ can contribute to the development of new utopias or imaginations and how these future narratives could look like?

The article referred to questions concerning urban transport. In my view, it is useful to make a distinction between creating images of utopia for urban transport and for interurban transport (including international transport). To put it simply, at some point in the future cities will need to sort out their transport systems or else descend into chaos: for me, the main question when thinking about desirable urban futures is whether they are fast (with high capacity public transport), slow (mainly walking and cycling) or some hybrid of fast and slow (but then how would that work in a way that was equitable?). However, whilst such thinking about urban utopia is challenging, I see the issue of interurban transport being a much greater challenge. Creating images of utopia for the latter is highly complex. Would we envisage everybody in the world being able to do the same amount of travel as a typical present-day Western university academic? If so, would such travel mainly be by fast means (i.e. by air)? Given technological forecasts this seems highly unsustainable in an environmental sense, but what is the alternative? Some people might like the idea of a rural fantasy where most people stay in their place ‘at home’ for all (most) of their lives: to me though this sounds highly feudal and unattractive. Perhaps one solution is to have high mobility (for those that want it) but for it to be slow and thus environmentally sustainable: essentially a mass nomadic existence. I think that current ‘mobilities’ research on present-day nomadism has much to offer thinking about such a future.

Among your key research interests you state the subject of public participation in transport planning. Which mechanisms of interaction with the ‘mobile customer’ are at urge and what are the examples from practice?

Whilst giving credit to the small number of researchers who have been interested in participatory planning in transport, most research in transport planning follows the traditional paradigm often described as “instrumental rationality”, which effectively means planning by experts. I like to think that this is not because transport researchers lack awareness on issues about participation, but rather because there are some fundamental problems inherent in participative transport planning. In particular, whilst participative planning (in a ‘direct’ non-representative mode) typically operates on a locality basis, transport is, except for short trips, not a localised phenomenon, i.e. it is about moving from one locality to another locality. To take an example, participatory budgeting (considered by many as an example of ‘best practice’ in participatory urban planning) involves huge numbers of residents deciding, on an annual basis, what the infrastructural priorities should be for their neighbourhood in the coming year. Whilst transport often gets included in priorities, transport measures are usually restricted to those such as traffic calming etc, that are obviously localisable, and not to cross-city public transport (which does not fit neatly into a neighbourhood).

More off-topic: Brazil has become your second home, which might offer the opportunity to compare cultural perceptions of time and its implications for mobility behaviours. As the Brazilian approach to temporality is quite unique, for instance being late for an appointment is considered prestigious, while being ‘on time’ is considered offending, does this reflect in everyday mobility behaviours of the Brazilians, e.g. compared to the UK?

Brazil is a large highly complex country, with different regions having highly different histories. The state where I live, Rio Grande do Sul, has an attitude towards punctuality that is almost Germanic (to use another cultural stereotype). Of all the many ex-urban bus trips that I have taken from the central bus terminal in Porto Alegre (the state capital) I cannot remember any being late when departing. I certainly could not say that for the UK! Also, whilst not directly concerned with punctuality, the system of participative budgeting method mentioned above, which requires a high degree of organisation, was originally developed in Brazil (and in particular in Porto Alegre). However, I accept that there are other parts of Brazil which have different cultures to Rio Grande do Sul. As an aside, I think that Brazil has much to teach Europeans about multiculturalism. Whilst it would simplistic (and inaccurate) to say that all problems associated with the existence of different cultures living side-by-side have been resolved in Brazil, much progress has been made over the past 100 years.