In the spotlight – Oksana Zaporozhets 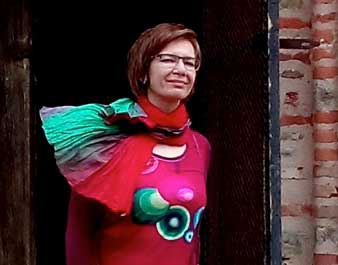 Our interviewee this time is Oksana Zaporozhets, a sociologist based in Moscow, Associate Professor at National Research University Higher School of Economics and leading research fellow at Poletayev Institute for Theoretical and Historical Studies in the Humanities. Oksana tells us about her research on subway use in Moscow, St. Petersburg and Kazan, touching upon issues of scientific trends, imagined obsoleteness, academy – society relations in Russia, and others.   How did you get interested in public transit and why are you focusing on subways in particular? I cannot say that at the very beginning my particular interest was public transport. Rather I was interested in how people live their lives in the city, how they perceive the urban environment and adjust it to their needs. That led me to ask which places and structures influence their life in the city most intensively. So it started with people and how they live in the city. Then I realized that transport is one of the crucial structures in the cities of today. It is especially true for Russia where the bursting development and renewal of transport infrastructures started a decade or so ago. Speaking about subways, I think that it is the meeting point of my personal and my academic interests. This interest arose when several years ago I moved to Moscow. The subway is evidently the structure that makes Moscow move. It is something essential for the spirit, for the life of the city. Lots of Muscovites are “underground species”: their map of the city is the map of the subway. Several years ago (again, it is, first of all, the case of Moscow) – the development of the subway was intensified, both new stations and new ideas appeared. I realized that if I want to understand how Moscow functions, I need to start with the subway. So for me underground transit is the key to the city, although it is important per se.   You have recently suggested quite an unusual perspective on urban subways. While stereotypically they were considered an emblem of modernity, you have shown that in many contexts today it can be perceived as obsolete. Is it possible to call this a regional specificity of the Russian cities in which you did your fieldwork?   A remark is needed here. I did start with the idea that people perceive subways as something obsolete or old-fashioned. As I am continuing my research I see that the idea of obsoleteness is not as widespread as I used to think. It looked like this in my previous fieldwork, but now, as I made perception a central topic; labeling subway obsolete does not seem so frequent. This in itself is one of the findings of my research. My next question was: why is it still perceived as something up to date? I think that there are at least two explanations. Firstly, in the Soviet Union subways really were emblems of modernisation, of building a new country. So this narrative of the progressiveness of subways is really widespread and has been preserved for a long time. Secondly, subways are not just Soviet heritage; they also connect to one of the main expectations of contemporary life, speed. The subway (at least) in Moscow works really fast and takes you from A to B. Thus, today most of the people think that the subway is quite modern and okay, but at the same time people notice that it lags behind in some of the standards of contemporary urban life. Subways are discordant to some urban spaces such as shopping malls, to modern buses with their air conditioning, or to renovated railway stations. And people do make comparisons, and in this way they see subways as obsolete. Interestingly, people perceive subway as fragmentally ageing. Some units of the infrastructure are functioning okay, but there are some bugs; these do not create major problems, but act like cleavages, or small hints, through which the past becomes evident. These multiple perceptions of ageing may be making my findings more complicated but also more interesting for me. I am not sure that this is a uniquely Moscow phenomenon. Recently I found a joke on Facebook about the London subway, an announcement in a bar, “Unlike the London tube we are at your service seven days a week”. And I think many cities who have their infrastructures constructed a century ago experience the same problem, be that London, Berlin or New York.   Do you think that knowledge on subway systems is transferrable between cities, regions, states?   My predictable answer is: partly yes, partly no. Of course, we can compare. Some technical traits are quite standardised. And it is interesting to understand how cities are connected on the planning level, because the decisions made in one city do influence those made in others, not only in terms of architecture but also in terms of construction and technologies. Right from its beginning the Moscow subway was not a isolated creation of the Soviet Union because it adopted some standard technologies. So you see that some subways are connected not only in researcher`s mind, but also pragmatically, though it is quite a surprise to see trains from the Moscow subway under Budapest. At the same time, the opportunity for comparison is often limited due to different cultural and urban contexts. For instance, it is difficult to understand subways in Soviet cities without keeping in mind their ideological meaning. Several cities with extra significance for the Soviet state were awarded metro systems as an honor prize, while there was almost no pragmatic need for this form of public transit.

Though these contexts are extremely important, I think it is time to start the study of subway, not as the particular one, but a group of. Criteria for forming a group of subways can be different.

For instance, the Moscow subway can be compared to the Kazan subway because both cities are identifying themselves as capitals. At the same time the small one line subway of Kazan can be compared to the small system of Glasgow with its only ring line, built in the end of 19th century, known as “The Clockwork Orange”.   Your research combines an attention to the emotional experience of transport users with micro-social interactions and choreography in transit spaces – these aspects are not that often presented in mobility studies. Why do you think, they remained overlooked for so long?   This is a puzzling question for me. I thought I was in trend, and that it was a widespread approach. May be the first wave of mobility studies were predominantly focused on general structures and globalization. It was necessary for the new field to create a frame, to give some basic explanations. And they turned to the idea of wholeness, to the big structures, to some metaphoric characters such as pilgrims, vagabonds, tourists. It was perfect for that time. And it responded to the demand of late 90`s – early 2000`s. But the situation changed in late 2000`s when different books, journals, manifests claimed that people were somehow missing. Even if we understand how a city works, we do not know how people use and actually change it. Evidently there is a difference between how it is constructed and how it is used. And we were so fascinated with pictures of big landscapes, that sometimes the users were forgotten. Maybe that is kind of provocative statement, but not being that much connected to Western academy and research centers means also being free from thinking about what is in trend. And this distance gives you a freedom to create your own puzzle. And I used this possibility happily: it was really supportive for me to find papers on passengers (for instance, Special Issue on Geographies of the Passenger edited by Peter Adey, David Bissell and Eric Laurier) or Geographies of Mobilities (a volume edited by Tim Cresswell and Peter Merriman), which proved that people do matter in transport studies. And I thought of that as a trend. From my perspective, surrounded by enthusiastic colleagues, I don`t feel my points of interest are peripheral. I prefer to think about different mainstreams. Sometimes they are parallel, hardly intersecting. Thus, we need a place for exchanging our ideas.   Do you consider outreach beyond the academy as an important task for mobility researchers in Russia and other post-Soviet countries?

I am sure it is important to make a bridge between academy and society and I think this is comparatively easy to do in Russia, just because we have some very good journals that are not academic but they like to reflect upon new ideas in a very professional way: Неприкосновенный запас, НЛО, Теория Моды. If you publish there, you automatically start communicating with very different audiences including those beyond academic boundaries. It is also quite easy nowadays to share your findings or to initiate a discussion using some Internet platforms (such as Postnauka.ru, UrbanUrban, etc.). That is the way you can reach urban dwellers, professionals or just anyone who is interested in the topic. Another side of the coin is that we hardly have an opportunity to talk to local authorities. This is much harder than reaching the “wider public” and it depends on the simultaneous wishes of both sides. Authorities are probably not ready to take into consideration some human related issues. It looks like authorities do not value the idea of the subway being human-sized; their concern is exclusively in developing material infrastructure as such. For example, it was great to have some ‘big names’ in Moscow speaking about big structures. City authorities are ready for this type of information, and for being up-to-date in technical terms, but not in terms of user-friendliness. You might know, one of the biggest modernization projects in Moscow subway was wi-fi in trains, but along otherwise the subway remains inaccessible to old people, to disabled people and to some other groups. And I think wi-fi here was more about technology than about people.

To your mind, how can the voices of social researchers be better heard in urban transit planning and management? Maybe through the education of authorities?   It may well be that “the Enlightenment projects” makes sense, but it takes time. I think that if you want to be heard it is not just a matter of a dialogue with authorities, it is also about communication with strong urban publics and general people. If you want something to change, you cannot bring ideas completely from the outside. You have to find interested locals, because new ideas are not valid without some inner support. People have to articulate or even declare: we want this and that. They have to start their own dialogue with authorities, but unfortunately not many seem to be eager to intervene.   Would you imagine presenting your research in other-than-text forms, for instance, as an exhibition?   Yes I was thinking about some kind of visualization, for example photography. But, funny enough, it is difficult to make good photos in subway. And I am not really a good photographer, so I would need a collaborator. Also I was thinking about website for interactive forms of presenting the knowledge. Websites could exhibit ideas of user practices and the fragmented aging of subways in a more interactive way interactivity of the Internet is what we often lack in research.       Interview by Andrey Vozyanov