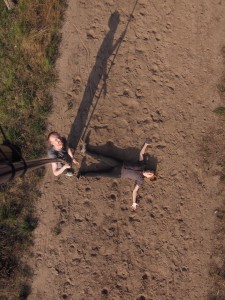 The Dutch artist couple Esther Polak and Ivar van Bekkum, operating under the name PolakVanBekkum, focus their practice on landscape and mobility (or motion or movement) and the experience of space. Since May 2014 they have been working a project called 250 Miles Crossing Philadelphia in conjunction with Philadelphia’s Science Centre campus as part of a unique place-making and community engagement program called Art Along the Avenue of Technology. In this project they are exploring the intersection of art and technology along Market Street as they build an online GPS-based navigation documentary, which will follow the movements of both objects and people as they move throughout Philadelphia. Andrey caught up with Esthar and Ivar over Skype to find out a little more about their project.

Could you tell a bit about the idea of the ‘250 Miles Crossing Philadelphia’ project, how did you come across it? Whose initiative it was?

Well, I think Mimi sent us a message that this call was out here. It was a competitive call here, so the artists could at first send their portfolio, and of those, five were picked to work out an idea for the local environment. We have been working earlier on this idea of doing a navigation documentary that combines sound recordings with GPS-trajectories, but we haven`t found a good context to actually develop it further.

Can you tell us a little more about the equipment you use in your practice? How did you invent this text?

It is a little bit based on our own curiosity in space. Ivar and I have collaborated since 2010. And we experiment to find out how we both experience mobility in Philadelphia. So at the end of the day we decided to tell each other how we remembered our trajectories. And then we found that Ivar remember very much the flow of the traffic. So, for example, we can specifically remember a person in a car, a car passing, that we had to wait for another car, so he remembers the whole interaction, little details. But I have a sort of different approach – I mostly remembered open spaces. I remembered where buildings were lacking, and then there was openness in space, that is how I sort of relate to space. I remember there are a lot of empty lots here. Philadelphia was a big industrial city but industry declined over the last fifty years. So there was big population that was here previously, so many sites became unused, so they turned it down, and the city is very much half-open half-built. There are a lot of little open spaces, which are not planned. I really noticed that in the way you can see one street from another, reliance of sight, that is what I remember. These are different ways of experiencing the city. So these observations were also used.

Your sound recording also unavoidably records the sound of movement itself. How do you treat this sound?

Surely. So, it depends a little bit. Some wind sounds on a microphone are really annoying, so we try to avoid those. It heats the microphone with the sounds that are not natural, so we try to avoid them or get rid of them. On the other hand you want to have the experience of the mobility. But we solved that by not recording the stereo then we have a person with two split mono-microphones. One microphone is on the person`s belly, the other is on the person`s back, so it`s a stretched out stereo effect. In a way the person becomes a microphone.

And how did you avoid undesired noise?

We invented a combination of foam, fur and various other bits of material to pack the sound recording equipment. But you also want to keep the person looking around more, to interact with the environment and not to be a totally wired, weird, kind of robot. So we put it in the bag in a way that did not stand out obviously.

We got into contact with Mimi Sheller and organised feedback meetings, where we show both the current stage of our project but also other art projects or things that we find inspiring for our work. And there we invite people who are interested and may apply more reflections about it. So we organise special evenings to talk about these matters. But we do not involve them directly in the research, process.

But is there some exchange of knowledge between you as artists and “them” as scientists, do you use the  findings,  theories  or concepts of mobility studies or sociology?

Absolutely. I`ve been reading Tim Ingold, I think many people in mobility studies read this text as well, I`ve have also been reading some texts on cartography. It has been very interesting to see how at first I felt more related to cartography but now that I have started to see how these mobilities texts also provide relevant contexts for us. I actually found mobility studies texts more inspiring for our work than cartography.

It seems like your projects are very much focused on human experience. Nowadays there are plenty of ways to displace the experiences of mobility – like headphones, smartphones and other gadgets. What is your own experience of these activities?

Nice question! First, I am always aware whether I distract myself from mobility or not, and if other people are also doing the same. I also realise that what works for distraction can also function to intensify the experience of space. For example, I remember when I bought my first Sony Walkman, I think it was in the late 70s, if I remember correctly. And I started to listen to music on the go. The Walkman did so much for my imagination, and I remember that it intensified my experiences of space a lot. If you listen to music whilst you are moving for the first time, for me it was like daily life became more like a movie, so it was like everything I`ve seen was relevant in a new way. I also think a lot of people have specific music for the car, and I don`t think they are using this to distract them, they also use it to intensify their experience of space.

Is it your first time in Philadelphia? If so, what is your impression of the city and its mobilty?

Yes, it`s the first time and of course it`s really totally different mobility dynamic, because it`s only the first time we are in Philadelphia, but also the first time we are doing the project in the US. And for the last 10 years we focused mostly on non-urban landscape than on the city. So it is both a new thing to be here but also to work in a city. So it is very specific for us. The city is organised by a grid, it is very American, and it creates a totally different way of experiencing the space, because it`s very clear-cut. There are not many curves on the road. And for this reason it really turns your experience. All streets are straight. If you look in Google map on Philadelphia or other American cities it`s very geometrical. It is not only a visual effect it also changes the way your mobility is organised. Taken to extreme, if you go from one place to another, you can only make one turn. Everything is in the grid, so you can look at the right, at the left, and just move in one direction until you are at the right surface and you have arrived at your destination. So, if you planned carefully, you can go from one place to another and only make one turn.

The US is well-known for its car culture, the Netherlands, in contrast, for its bicycle or public transit culture and, Europe is in general more public transit friendly and not so car dependent. Do you feel this difference here, or is Philadelphia an exception with its buses, trolleybuses, trams, subway and rail?

I think Philadelphia is very much an exception. Maybe you are a little bit more car dependent here than in the Netherlands, but I think it is the most intensively biked city of the States, so we also reacted by buying a bike, I do not even have a driving license, so I mostly bike around here, and in the neighborhood there  are sidewalks with parked cars, there is hardly any public space here and you can basically move around with a car, it is very durable if you drive.

For your project do you also make sound recordings in public transit and in vehicles?

We also make recordings of buses and trolleybuses. We try to work not only with people but also moving objects.  We also made recording of horse rides, because, surprisingly, there are a lot of stables here in the city, and people still go horse riding in the city. I think it is very special. And we also record the objects that are not self mobile but are part of mobility systems. For example, Uzbekish restaurant, there are many people who migrated here from Russia and come to the restaurant to have their favourite food. We did recordings not in the restaurant itself but in the street near the kitchen, so that you can hear the hum of the fridge when the door opens with voices of all these people in kitchen mostly speaking Russian.

What are the expected outcomes of the project?

If everything goes well, it will be the interactive website where you can see the map with trajectories, we made them into animations, using Google as a platform and we will also make a version suited for display in an exhibition situation.

Sounds very intriguing! We look forward to the results. Thanks for taking the time to tell us more about the project and good luck with it in the future.