In the Spotlight … Bruce Pietrykowski

EC member Bruce Pietrykowski goes under the microscope in this newsletter.  Having developed an interest in the urban environment during his teenage years, he has brought fresh perspectives to T2M, coming from a background that is not strictly transport or mobility history at first glance.  However, as Bruce’s work has shown us, this is an advantage, opening up new areas for investigation. 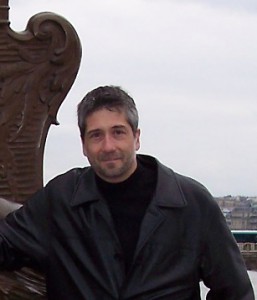 How did you get into academia?

As a result of my interest in cities I decided to study urban planning at Rutgers University in New Jersey.  In addition to studying urban planning I was fortunate to have landed at one of the few university programs in the United States that also housed a very ideologically diverse group of faculty in economics.  After Rutgers, I then went on to graduate school in economics at the New School for Social Research in New York.  The New School has a storied history.  It was founded by Charles Beard, Thorstein Veblen and John Dewey as a university for working adults.  It also gained a reputation as an intellectual haven – the ‘University in Exile’, it was called – for émigré Jewish intellectuals fleeing the Nazi regime.  By the time I arrived a new generation of faculty was in place but the New School continued to welcome and encourage interdisciplinary research with a special attention to the intellectual traditions of Continental philosophy.  I received my Master’s and Ph.D. in economics at the New School with a brief detour through the city planning program at Cornell University.  I then returned to the Midwest, this time to Detroit and the University of Michigan campus in Dearborn.  Until this year I was the founding director of the Center for the Study of Automotive Heritage.  I am currently Professor of Economics and Director of the Urban and Regional Studies Program.

What are you researching at the moment?

I just completed a manuscript on consumption theory and consumer practices, Political Economy of Consumer Behavior: Contesting Consumption for Routledge.  My intent here is to excavate economic theories of the consumer that were abandoned or neglected because they didn’t fit into the mainstream, neoclassical model.  I focus this historical research on three schools of thought, and three time periods: First the development of consumer economics (understood in its original meaning as household management) within the field of home economics from roughly 1920-1940.  I then explore the work of George Katona, one of the founders of psychological economics, a precursor of modern behavioural economics.  Katona’s work in survey research stretches from about the 1940s to the mid-1970s.  The third path not taken involves the Regulation school theory of Fordism.  While Fordist theories are popular in sociology and geography, they have not made very deep inroads into economics.  I explore ways to extend and deepen the Fordist treatment of mass consumption by using the concept of user culture within a theory of social practices.  The final portion of the book involves three contemporary case studies – green automobility, slow food, and local currency – that illustrate the broader view of consumption that I develop in the earlier chapters.

What have your other research interests – particularly economics and the role of labour – contributed to your understandings of transport and mobility history?

Well, I have a long-standing interest in interrogating the theory and history of Fordism.  I happen to be well-located in Dearborn to undertake this research.  When I first arrived at UM-Dearborn I visited the research library at the Henry Ford Museum  and discovered the existence of these small Ford plants located around Detroit that were used to supply parts to the Rouge plant.  Given that the Rouge was supposed to be the world’s leading example of spatially integrated mass production this struck me as odd, to say the least.  Well, this puzzle piqued my interest and I’m still exploring the ramifications of this production system and how it deviates from the textbook version of Fordism.  I’ve collected a great deal of data on individual plants, working conditions and labour relations and my next project is to write a book about it.

North American society is commonly perceived as being dominated by the car.  Is the car similarly prominent in mobility history in North America?

The car is ubiquitous in North America.  I was about to say that outside of New York City the car dominates the mobility scene but I had to refrain from making this claim since, while it’s true that millions of New Yorkers ride the subway, the visual landscape of the city above ground is dominated by the car.  Unlike cities in Europe the bicycle is still a pretty rare sight and bicyclists are a brave breed of individual in cities like New York.  As for historical accounts within the frame of mobility history the car, I believe, still dominates because of the sheer pervasiveness of the system of U.S. automobility that includes the automotive road infrastructure, energy supply network, spatial ordering of residential, retail and office districts, political legislation, aesthetics and architecture.  Take, for instance, the influence of the automobile’s agents (manufacturing corporations, labour unions, energy companies, housing and business developers, travel and leisure industries…) on legislative history around issues as prominent as environmental regulation, labour laws, housing legislation and, of course, mass transit funding legislation.  Then again, I don’t want to overstate the case by any means.  There is also a robust research focus on rail and air mobility artifacts and processes among North American T2M members.

How do you think T2M can raise its profile in North America?

I recall that at the 2002 SHOT conference in Toronto, Gijs Mom called an informal meeting of interested parties around the idea of forming a network of scholars to work on mobility history.  At this hastily called meeting there was a full house and many North Americans were in attendance.  A year later T2M held its first conference in Eindhoven.  I think that there is interest in North America.  I feel that more North American conferences, like Ottawa, will help.  One of the things I noticed after I chaired the local organizing committee for the 2004 T2M conference in Dearborn was the stark difference between the appreciation that private industry and government agencies had for transport history in Europe versus the indifference shown by the same type of organizations for U.S. transport history.  The value placed on historic artefacts and historical research is quite low in the United States, in general.  That’s a problem for an organization trying to generate a bold new research agenda in North America.

Your term on the EC will expire at the Ottawa meeting.  What have been the high – and low – points of being on the EC over the last four years?  And what advice would you offer to new EC members?

Being a member of the EC was a great opportunity to see the bigger picture in terms of the organizational structure and the field of mobility history.  It also allows one to really be in the vanguard, if you will, of breaking new ground and creating an organization with the potential to transcend disciplinary divisions.  I recommend it.  There is still much work to do.  For example, there remains a lack of a shared vision about the goals of T2M.  Is an annual conference enough, for example?  Early in the development of T2M I probably would have said, yes this is fine.  However, I’ve come to appreciate the potential for mobility history to become a new field with new methods.  I am intrigued by what John Urry and his colleagues are doing around “mobilities” study, for example.  So I suppose we have to have some clearer consensus over the scope and direction of T2M.  I am very happy to see new and/or young scholars enter the field.  In fact, I decided to step down from the EC in the hopes that these new people will join the Committee.  I’m also a firm believer in applying the principles of participatory democracy and so I believe we should all take turns serving on the EC and rotate responsibilities over time.