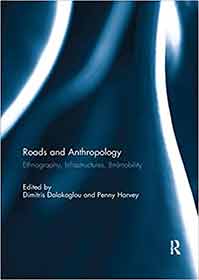 Roads and the powerful sense of mobility that they promise carry us back and forth between the sweeping narratives of globalisation, and the specific, tangible materialities of particular times and places. Indeed, despite the fact that roads might, by comparison with the sparkling agility of virtual technologies, appear to be grounded in twentieth century industrial political economy they could arguably be taken as the paradigmatic material infrastructure of the twenty-first century, supporting both the information society (in the ever increasing circulation of commoditized goods and labour), and the extractive economies of developing countries on which the production and reproduction of such goods and labour depends. Roads and Anthropology is the first collection of road ethnographies, edited by two pioneers in the anthropological explorations of infrastructures, the essays published in the book aim to pave the way for this rising field of anthropological research.
This book was published as a special issue of Mobilities.