Empire and mobility in the long nineteenth century 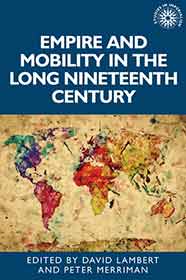 Mobility was central to imperialism, from the human movements entailed in exploration, travel and migration to the information, communications and commodity flows vital to trade, science, governance and military power. While historians have written on exploration, commerce, imperial transport and communications networks, and the movements of slaves, soldiers and scientists, few have reflected upon the social, cultural, economic and political significance of mobile practices, subjects and infrastructures that underpin imperial networks, or examined the qualities of movement valued by imperial powers and agents at different times. This collection explores the intersection of debates on imperial relations, colonialism and empire with emerging work on mobility. In doing this, it traces how the movements of people, representations and commodities helped to constitute the British empire from the late-eighteenth century through to the Second World War.