The “Dolmus” and “Minibus” of Istanbul: Two Different Shared Vehicles and Cultures of Urban Transportation, part 1

Basak Tanulku is an independent researcher, based in Istanbul, Turkey.  Tanulku obtained a PhD degree in Sociology from Lancaster University in the UK for the research project: “An Exploration of Two Gated Communities in Istanbul, Turkey” (2010). Her main work focuses on socio-spatial fragmentation, gated communities; space and identity; urban vacant lands and buildings; urban social movements and protests and alternative spaces and public spaces and urban commons. Tanulku has written for various blogs and published articles in peer-reviewed journals.

This post is the first part of a two-part installment, which will conclude next week on MHB.

Cities are connected through a complex system of transport which allows mobility of people, goods, and places. An essential aspect of urban transport is “shared taxis” (either private or public initiatives) which provide cheap and flexible travel in countries as diverse as Nigeria, France, and Eastern Europe (Ukraine, Romania), Russia and India, as a result of the insufficiency of the public transport or economic crisis. They are used mostly by the urban poor, to reduce the cost of travel and to have flexibility in daily urban travel. They are also analysed within the context of sustainable urbanism since they provide travel while saving energy. In most of the research studies, their technical aspects or their roles in urban planning or in creating a sustainable urban transport system are investigated. Instead, this blog post adopts a historical and cultural approach to analyse two forms of shared vehicles, “dolmus” and “minibus” in Istanbul, the largest city in Turkey. It relies on the information collected by observation of the author, a long-time resident of Istanbul and a frequent and regular user of dolmus and minibus as well as media and desk research. The blog post demonstrates how both vehicles emerged as a result of people’s demand which could not meet by the municipalities. However, as it shows, they evolved from informal vehicles into formal ones having essential roles in the city’s complex transportation system, reflecting different cultures, passengers, designs and communication between passengers and drivers[1].

Istanbul: A City Connected by a Complex Transport System

Istanbul is the most populated and densest city of Turkey with an approximately 15 million inhabitants which also keeps a high-rank position in these categories among other large cities in the world. Even if Istanbul is not the official capital city, it can be regarded as the country’s leading economic, commercial, financial and cultural centre. It is located between the Balkans and the Middle East which grows across the East-West axis. Bosporus divides Istanbul into two: European and Asian sides[2]. There are three bridges on the Bosporus connecting the two sides, which can be transited by private cars, as well as buses, dolmuses, and minibuses.

Istanbul was the capital city of the Ottoman Empire, and the modernisation of its transportation system began in the last decades of the Ottoman Empire. At that time, the urban landscape was dramatically changed which continued with the secular Turkish Republic in the 20th century. During the second half of the 19th century, Istanbul was transformed by several interventions such as the opening of large boulevards and squares, the erection of tower clocks, the construction of concrete apartment blocks, all of which contrasted with the old and vernacular built environment left from the Byzantium and the Ottoman Empires (Celik, 1986; Guney, 2012). As an example, in 1851 ferries were introduced which connected different villages across Bosporus. In 1875, one of the oldest undergrounds of the world, known as the TUNEL opened connecting Karakoy and Beyoglu, which were important centres of foreign commerce and banking. Similarly, tram goes back to the 1870s when Istanbul needed a more developed transportation network. However, it was replaced by motor vehicles such as buses during the 1950s, when the city’s population grew as a result of continuous migration from rural areas and towns for working in its developing industries.

Istanbul’s traffic also reflects these numbers: it is ranked sixth in the world in traffic congestion[3]. Istanbul has an elaborate system transportation which involves different vehicles operating on different routes and schedules. A highly professional network connects this transportation system, such as smart screens and tickets, motor vehicles, and expressways, supported by a large number of technical staff. In this network, the same passenger can travel the same route in different vehicles according to the passenger’s time and budget availability. In Istanbul, there are two different ways of transportation: land and sea. However, as the following numbers will demonstrate, sea (ferries, boats) is not used very widely among people. Instead, the city’s inhabitants prefer travelling via motor vehicles such as private cars or buses. As an example, according to the data provided by the Istanbul Municipality, Istanbul’s public transportation is provided by three primary vehicles: sea, tram, and motor vehicles. Among them, motor vehicles have the most significant share (78.02 %), while sea has 4.38 % and tram has 17.60 % (including tram/underground, the railway and the undersea tunnel, MARMARAY). Among motor vehicles, 16.03 % of total transportation is done through minibuses, approximately 30% is done through buses and metro buses (including those managed by the municipality and private companies and individuals), and 12.95 % is done through taxis and taxi-dolmuses while the shuttles hired by companies have a share of 16.97%[4]. In the last years, the underground has become another important way to travel in Istanbul which is preferred for avoiding traffic congestion. There are also expensive options such as helicopters or sea-taxis which are preferred by celebrities or the very rich.

Istanbul’s transportation can also be read within the governance framework: the municipality governs most of the buses, trams, and ferries. However, dolmus and minibus can be regarded as “paratransit vehicles,” i.e., they operate outside the state or municipality realm, and owned and managed privately (either by individuals or private companies). While most of them are registered and work legally, some of them are not registered instead, operate illegally.

There is not any data about the number of dolmuses or their share in transportation. Dolmus is used in the city centre (business, retail and residential areas) and has a much lower usage than other vehicles (such as buses, minibuses or tram). However, it is an essential part of Istanbul’s traffic and everyday culture which has created its jargons, identity, and designs. Dolmus firstly emerged in Istanbul during the 1940s to meet the city’s growing need for cheap transportation. The first dolmus line was introduced by a cook between Eminonu and Nisantası, to meet the demand of his customers aiming to travel less expensive as the result of the economic crisis during the War (Acarer, 2014). The same route still operates today. Dolmus means ‘stuffed’ or ‘full’ (of passengers) in the Turkish language. The first dolmus vehicles were American foreign cars, regarded as signs of status, modernity, and progress among drivers and passengers. 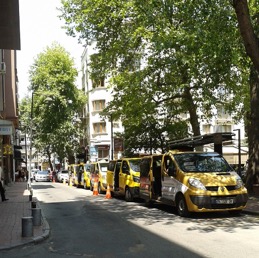 The current dolmuses are not old American cars, but small yellow vans which were introduced during the first half of the 1990s. Until that change, dolmus has not experienced significant changes. However, an important change in its design took place during the 1970s when the rapid increase in oil prices led drivers to search for alternatives to reduce energy costs or increase the number of passengers. To minimise energy cost diesel motors were introduced, while to increase the number of passengers a seat was added inside the vehicles which changed their original designs.

The dolmuses wait at stops approved by the municipality, which usually consist of a signboard demonstrating the name of the stop. The drivers typically wait near their dolmuses, or at a café or a similar mobile café which sells food and drinks. The drivers put chairs near the stops to rest.

Each dolmus can accommodate maximum nine passengers per shift. Since dolmuses are smaller vehicles (between a minibus and a taxi), passengers always sit inside the vehicle and cannot carry a large amount of load, such as a pushchair. The driver’s seat in a dolmus is not segregated from that of the passengers. Near the drivers’ seat, in the front row, usually two or one passengers are accommodated who talk to the driver while on board. Dolmus is cheaper than individual taxis, and the price depends on the length of the route. The money is passed by passengers from the back rows to the front until it reaches the driver and always paid in cash. Money is kept near the driver’s seat.

The passengers urge drivers when they want to stop such as “müsait bir yerde durur musunuz” (could you please stop at a proper place?) or “inecek var” (there is someone who wanna stop). The driver has the power to manage the travel (when to switch on and off the air conditioner or the radio) and also decides when to change the regular route to avoid delays such as an accident or something else which causes congestion. The drivers also have walkie-talkies which provide communication with other drivers about the road’s condition. The dolmus vehicles are the same to each other, i.e., the small yellow vans. However, in last years, different from shared taxis in other countries, they are used as boards for advertising. The money goes to the driver or the company. Drivers personalise their dolmuses by decorating their interiors with the photographs of their family members or talismans or prayers against accidents and bad luck. [5] The drivers are always men. However, particularly during the day at certain times, only women use them who go shopping or visiting friends or relatives, which make these vehicles as women-only realms. Different from minibuses, dolmuses are not seen as macho or premodern, even if the drivers are always men.

Next week, Dr. Tanulku concludes discussion of transportation in Istanbul with a focus on the role of the minibus in the city.

[1]  There is few research studies conducted about them in Turkey. The research studies mainly focus on their role in urban planning and transportation. There are also research studies which focus on the design of these vehicles and how they can provide a sustainable and/or greener transportation for passengers. By keyword search conducted by the author in the database of Council of Higher Education which lists all graduate and Ph.D. theses in Turkey, there are only five theses on dolmuses and nine on minibuses (by the search through the keywords “dolmuş” and “minibüs”). Please see https://tez.yok.gov.tr/UlusalTezMerkezi/tezSorguSonucYeni.jsp (accessed 03.07.2017). In some of these sources, these terms are used interchangeably.

[4]   Except for private vehicles http://www.iett.gov.tr/tr/main/pages/istanbulda-toplu-tasima/95 (accessed 03.07.2017). However, it should be noted that here “public” refers to how a vehicle is shared, rather than its status of ownership. As an example, minibus, dolmus, and taxis are not owned or run by the city municipality, but by private companies or individuals. However, they are regarded as public since they are not used individually but shared among passengers.

[5] In the research study on minibuses, Cengiz argues that their decoration and design reflect drivers’ identities. This is seen in their interiors decorated with rosaries, talismans, photographs, and mascots while their exteriors are decorated with meaningful words, reflecting love, missing or losing (Cengiz, 2013).