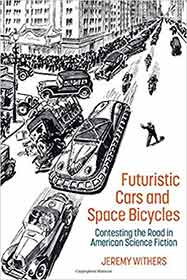 Given the extensive influence of the ‘transport revolution’ on the past two centuries (a time when trains, trams, omnibuses, bicycles, cars, airplanes, and so forth were invented), and given science fiction’s overall obsession with machines and technologies of all kinds, it is surprising that scholars have not paid more attention to transportation in this increasingly popular genre. Futuristic Cars and Space Bicycles is the first book to examine the history of representations of road transport machines in nineteenth-, twentieth-, and twenty-first-century American science fiction. The focus of this study is on two machines of the road that have been locked in a constant, often bitter, struggle with one another: the automobile and the bicycle. With chapters ranging from the early science fiction of the pulp magazine era in the 1920s and 1930s, to the postcyberpunk of the 1990s and more recent media of the 2000s such as web television, zines, and comics, this book argues that science fiction by and large perceives the car as anything but a marvelous invention of modernity. Rather, the genre often scorns and ridicules the automobile and instead promotes more sustainable, more benign, more restrained technologies of movement such as the bicycle.