Cogs, Small Cogs, and Boats: The Thirteenth Until Sixteenth Century Dutch and Flemish 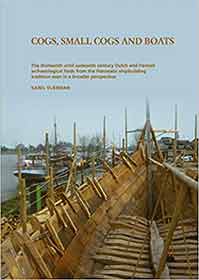 From the thirteenth to the fifteenth century an important part of the economy in northwestern Europe was based on trade in the Hanseatic League. The main means of transport consisted of ships, mainly cogs. The importance of this type of ship was already apparent from medieval documents, miniatures, and other sources. However, until the mid-twentieth century, no material remains of such ships were known. Results from archaeological excavations of shipwrecks had to be awaited for greater clarity on the construction, technology and appearance of these ships.

One of the world’s largest collections of medieval shipwrecks emerged after the Second World War during the partial reclamation of the IJsselmeer lake (the former Zuiderzee inlet) in the Netherlands, where three polders were created from 1942 onwards. During these works, hundreds of shipwrecks from the period between 1250 and 1900 were discovered, about twenty of these being cogs. The first cog was excavated in 1944. The famed cog, with its remarkable construction and the ingenious manner in which the seams between the planks were made watertight using moss, laths and iron clamps, clearly demanded an in-depth study. The Netherlands were an ideal place to start, as more than half of all the cog wrecks in Europe have been found, (partially) excavated and studied in the Netherlands.

Maritime archaeologist Karel Vlierman has excavated shipwrecks all his working life. He dedicated himself to the research of these ships, including two cogs found at Doel near Antwerp and the recently uncovered cog from the river IJssel near Kampen. His research of more than twenty years has resulted in a monograph of 996 illustrated pages, together with some 70 large technical drawings of all the investigated cogs and their reconstructions. The monograph (in two volumes) and the folder with the 70 technical drawings -in A0, A1 and A2 format- together come in a fine slipcase.

Karel Vlierman explains the shipbuilding tradition of the Hanseatic period in detail and clarifies the differences between the cog and, for example, the ‘nef’ of the southern North Sea, which belongs to the Nordic or Scandinavian tradition. Based on the finds excavated at Kampen, he considers it very likely that a shipyard was located there in the late thirteenth and early fourteenth century. The largest piece of woollen sail ever excavated was discovered at Kampen. Hundreds of typical iron clamps too were found, some of them unused, suggesting a blacksmith’s workshop specifically dedicated to producing them. Ships could be hauled out from the water and, after repairs, sail to the Zuiderzee via the IJssel. This is the first cog shipyard ever to be discovered in the Netherlands.

Until the ‘IJssel cog’ was discovered and excavated near Kampen, the so-called ‘Nijkerk-II’ was the best-preserved known cog. The analysis of this cog was the starting point for this study, together with the experience gained during the construction of a replica of it, the so-called Kamper Kogge (Kampen Cog). It gradually became clear that there had been a tradition of cog building. Through studying and drawing all the cog wrecks, it was possible to make reconstruction drawings of many of them, with the benefit of evidence already obtained from other wrecks.

This voluminous and impressive book will set the standard for publications on maritime archaeology for decades to come, as it is the landmark handbook for the way in which shipwrecks should be documented, described, and reconstructed. The detailed manner in which the technical drawings have been created makes it possible to construct virtual 3D models. The vectorised drawings are of a very high quality and are available digitally.

In addition, Karel Vlierman created about twenty artists’ impressions of the cogs as they must have looked during operation and of life on board. These not only appear in a large format in the book but are also available as postcards and posters.

This will be the standard work on cogs, the first of its kind to be published, with the size and scope of the study unequaled in any area of maritime archaeology. The famous publication on the sixteenth-century ship Mary Rose comes close but is about a single ship only. The present book on cogs covers the entire spectrum of these vessels, from seagoing ships to boats and barges plying the inland waterways and even a possible military cog for army transport.