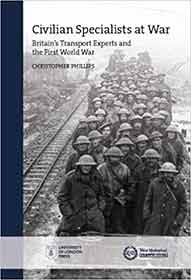 World War I was the first great general conflict to be fought between highly industrial societies able to manufacture and transport immense quantities of goods over land and sea. Yet the armies of the war were too vast in scale, their movements too complex, and the infrastructure upon which they depended too specialized to be operated by professional soldiers alone.

In Civilian Specialists at War, Christopher Phillips examines the relationship between industrial society and industrial warfare through the lens of Britain’s transport experts. Phillips analyzes the multiple connections between the army, the government, and the senior executives of some of prewar Britain’s largest industrial enterprises, revealing that civilian transport experts were a key component of Britain’s strategies in World War I. This book also details the application of recognizably civilian technologies and methods to the prosecution of war, and documents how transport experts were constrained by the political and military requirements of coalition warfare.