“In the Spotlight” – with Phillip Vannini 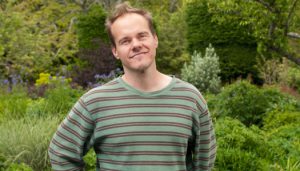 Phillip, you are an ethnographer and Professor at the Royal Roads University in Victoria/ Canada, studying subjects such as marine mobilities or off-grid energy assemblages. What are for you the reasons that make mobilities an intriguing and fascinating field of ethnographic investigation?

I never grew up. As a kid I played with trains, planes and automobiles, and somehow those toys formed my imagination. For me it wasn’t so much about the pleasures of pretending to go fast–which I think appeals to many children who play with those kinds of toys–but more about the power to imagine going somewhere, anywhere. Much of my research in mobilities today is very much informed by that starry-eyed, dream-like attitude. My research on the ferries was driven by my interest in going everywhere those boats could take me. My research on off-grid living was about going farther: to the edges of Western modernity where remoteness is worn by local inhabitants as a badge of pride. And more recently with my brand-new research on floatplanes and floatplane pilots it’s been around travelling through unusual spaces, but also back in time: toward an era when flight was less regulated, less informed by regimes of fear and control, and more shaped by art, skill, passion, and craft.

Again, it’s about toys. Cameras are a different kind of toy than car models, but still a playful tool for expanding and shaping the imagination of knowledge producers and consumers alike. Both in Life off Grid (85 minutes), and Low & Slow (26 minutes) I tried to use the narrative and aesthetic conventions of documentary film to play differently with well-established ideas about movement, lifestyle, and sense of place. I believe that more and more researchers–especially young students–are becoming attuned to the possibilities for re-envisioning knowledge that more-than-representational modes like video offer. So, to answer your question, while I believe that the field is still too text heavy, I also find more and more openness and acceptance toward innovative approaches. I do not believe that modes of communication like video, however, can achieve the same level of conceptual refinement and precision that writing offers. On the other hand, I believe that video can enliven and animate the lifeworlds that I study in a way that writing cannot. In a perfect world, the two modes–and others as well, of course–would co-exist side by side in the pages of our journals; pages that are becoming more entangled with HTML than paper fibre anyway.

Following concepts by de Certeau (1984), you have described movements of slowing down (e.g. Slow Food, Città Slow or “off-gridders”) as potentially tactical counteractions. Do you think slower mobilities can become a mainstream planning paradigm or a political ‘new normal’ superseding distinguished characteristics of a counterculture?  Might we for instance move slower but therefore more reliable?

Slower mobilities are a response to the dromophilia characterizing our life in hypermodern society. You have to understand that I live in a place–a small island in the Salish Sea in British Columbia–where cars proudly sport bumper stickers that read “Slow down; this ain’t the mainland.” Right now I am typing my answers in my garden, where the only visible and audible things that move are birds. Is this a counterculture? Perhaps. But I like to think of exurban spaces like this more as a by-culture: a by-product of sorts of a Janus-faced society that venerates speed while dreaming about a cabin in the woods, a house on an island, or a winter in Costa Rica. I don’t think exurban people–and their related ways of life–will ever become a dominant or mainstream culture. And if they did, I would hate to plan travel in such a world. My interest in these sorts of issues stems more from a reminder to the rest of the discipline–which is often so single-mindedly focused on hypermodern urban life–that theories that ignore the rest of the world can have no universal purchase. My hope in generating slower studies is just that: a lament for recognition that alternative mobilities, and related lifestyles, still do exist.

Your research has revealed the limitations of describing transitory environments, e.g. waiting in lineups, as merely socially impoverished non-places. Instead, these milieus can create unique forms of communicative livelihood. How do you think ethnographic research can contribute to the planning of transport environments, such as ferry terminals or airport lounges?

Anyone who has been to more than a handful of airports around the world could answer that question by listing airports where waiting is pleasant (and often even puts you in the mood to spend money!) and airports where you simply can’t wait to get out. OF course you can say the same about train stations, ship terminals, and so forth. Transitory environments designed with the purpose of facilitating social interaction put comfort, convenience, and aesthetics first. Places like those are instrumental in generating the conditions for an atmosphere of conviviality, mutual recognition, and liveliness. Places that are designed simply to direct people around to spend money and then push them toward their gates foster an atmosphere that alienates and objectifies travelers as consumers and–increasingly–potential threats. And since I know you’re going to ask me what my favorite, and least favorite airport terminals in the world are, I’ll anticipate that question. The answer is Vancouver (favorite) and LAX (least favorite).

What do you think are becoming the most pressing topics and “big questions” to be addressed by (historically working) mobilities scholars in the coming years?

Mobilities research is too dominated by issues pertaining to the Western World. I hope that in the future we will be exposed to more studies that focus on what it’s like to move–and what is has been like to move in the past–outside of North America, Western Europe, and Anglophone Oceania. Also, I believe that energy has been a relatively ignored topic for too long. As fossil fuels become more expensive and scarcer, the potential to better utilize and better understand sustainable mobilities will increase. I hope so, because otherwise I might have to tell my inner child to stop dreaming about travelling the world.