New Book – With Power and Purpose by Maxwell G. Lay

A former T2m member, Dr Maxwell G. Lay has just published a book entitled With Power and Purpose: How 19th
Century Transport Innovators Totally Changed the Way the World Operates. For a summary of the book by the author, see below: 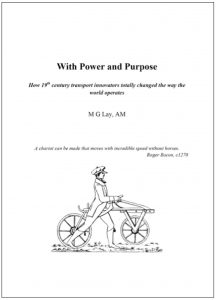 With Power and Purpose

Published in 2016 on Kindle

As I thought more about these matters I came to realise the astonishing extent of the transport changes that had occurred during the 19th century. Nothing like it had ever occurred before, and the 20th century was mere incrementalism compared with the quantum changes of the 19th century. What a story there might be to uncover and to use to shed more light on our transport inheritance – where did all the 19th century’s key transport features come from and why are there so many inventions, innovations, inconsistencies and illogicalities in the story?

Hence this book, which is my attempt to understand the origins of much of our current transport world. I write it as an engineer specialising in transport and certainly not as an historian additionally steeped in matters of economics, or politics or social structures. There were many great and fundamental changes occurring during the 19th century and my transport specialisation was just one sub-set of those changes. It is appropriate therefore for me to use the words of a leading English historian – Kitson Clark – to provide a broader context for my story. Clark described events of the 19th century as:

“a larger movement in history … which went on throughout the 19th century … and which swept through human affairs and carried away the ancient régime with its aristocracies, its hereditary monarchies, its prescriptive rights and left in its stead a world whose values, on the whole, we still accept.”

I have written this book in my home town of Melbourne, Australia. Melbourne was not founded until the mid-1830s so I can view the 19th century without a strong parochial view. Indeed, my self-assigned task was to take world view of 19th century transport changes. Nevertheless, much of the book has a strong British orientation as without question the Industrial Revolution was a period and a process predominantly initiated and implemented in Britain. However, when the Revolution lost momentum in mid-century – or entered its second stage in the view of some commentators – Britain steadily began to lose its leadership role. By the end of the century France and south-western Germany were dominant change-makers and the USA was appearing on the horizon. How Britain lost, or even threw away its leadership, is story that I explore within the wider thrust of this book.

Finally, I have tried where ever possible to highlight and pay homage to the many individual inventors and innovators and entrepreneurs who caused the dramatic transport changes that occurred during the 19th century. They did this through individual initiatives to satisfy personal rather than corporate or national goals. And they were often hindered rather than aided by the various arms of officialdom.

It is easy to be swayed by the romantic idea of a few wonderful innovators such as Watt, Brunel, Telford, Siemens, Daimler and Benz creating major and almost instantaneous quantum jumps in technological advancement. However, if we take the prime cases of the external combustion steam engine and the internal combustion petroleum-fuelled engine, what we have actually seen are long series of incremental set-backs and advances, dead ends and new markets, misunderstandings and occasional new understandings. For example, the first really useful IC engine was Daimler and Maybach’s 1885 “grandfather clock” engine, some 90 years after the first trials of such an engine.

One lesson that can be drawn from the 19th century is that the future will always be unknown. This is no excuse for communities not to express their social aspirations and to say that whatever unexpected changes might happen in the future, they should operate within some generally accepted guidelines. No such guidelines existed to prevent the excesses of the 19th century railway era and in the 20th century there were no articulated aspirations that produced guidelines preventing the over-supply and over-use of motor vehicles.

The second key lesson from the 19th century – and a lesson confirmed by the subsequent century – flows from the observation that no one, despite their personal brilliance, had in anyway predicted how the future would unfold as a consequence of the changes that they and their peers were producing.

The future is as unpredictable now as it was in the 19th century. So surely we must carefully define the guidelines for any man-made changes and we must, in the words of the finance industry, always hedge our bets to cover the gamut of possible futures.